The second edition of TCEC Cup, the minor trophy of the Top Chess Engine Championship, is going to start this January 21st. It will be a knockout competition involving the 32 world’s best chess engines. See the announcement article here.

TCEC Cup 2 consists of a total of 32 matches divided into sixteenth-final (aka round of 32), eighth-final, quarter-final, semi-final and final. For an engine to reach the TCEC Cup gold medal it must win a total of five matches. Both participants that lose the semi final will be awarded a bronze medal.

Here are the brackets of the upcoming TCEC Cup 2: 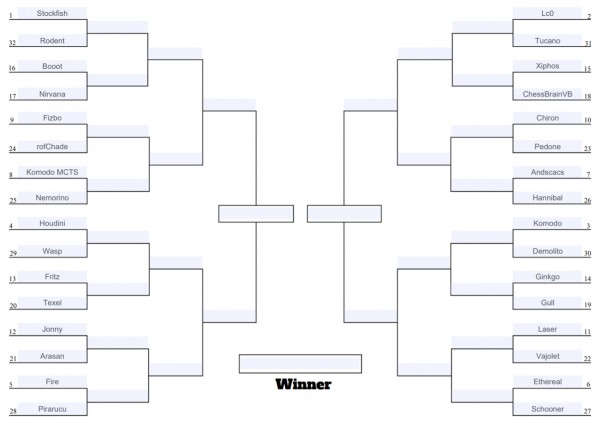 The TCEC Cup 2 is a knockout format played in TCEC, including all qualifying participants, seeded according to their respective final results in this season’s divisions. The 32 qualifying engines consist of the participants of Premier, 1st, 2nd and 3rd Division, plus the top 9 engines in 4th Division: because Deus X dropped out due to the uniqueness rule, the top 9 engines from Div4 are in the Cup this time (also three engines advanced from Div4 to Div3 this Season 14).

The TCEC Cup 2 will take place right after the Premier Division and before the Superfinal, starting on 21 January 2019. It will be a knockout championship with the 32 participants divided into brackets. Each participant will be seeded according to its final standing in the TCEC league event with the #1 seed meeting the #32 seed, #2 meeting #31, etc.

The TCEC Cup 2 will consist of a total of 32 matches divided into sixteenth-finals, eighth-finals, quarter-finals, semi-finals and final. For an engine to win the TCEC Cup gold medal it must win a total of five matches. The two losing semifinalists will play a match for 3rd and 4th place (`small final’).

All matches are played with a book exit from one of the three books in use: A, B or C. No bookless games will be played in the TCEC Cup.
Alternating match games will begin from a randomly selected starting position contained within an opening book created by Nelson Hernandez (aka Cato the Younger) with a large number of unique starting positions derived from human games. Engines will play both sides of each position selected. Openings chosen will roughly approximate human games in terms of their frequency. A new opening should thus occur every other game, then the reverse game is played, so two games in a row from the same starting book position. Because each engine will thus play both sides of every opening, fairness is guaranteed.

All three books will be used randomized.

Each of the matches will at least consist of 4 pairs of games (8 games, every second with reversed colors and the same opening). These 8 games will always be played out in full, even if a decisive match result is reached before the full 8 games have been played.
In case of an equal score after these 8 games, tiebreakers will be played out at the end of the Cup round. First the 4 pairs of games will be played out for a round, before playing out the tiebreakers therefore.

Tiebreakers will be played according to the following rules:

Time control will be 30 mins + 5 secs increment per move for the normal games in a match, as well as for the tiebreakers up to and including game 32. If an engine loses on time, that result will not be changed nor the game replayed. If the TCEC game server locks up at any time during a game (BSOD, freeze etc), that game will be restarted unless the last position was a 6-man or less tablebase position, then it will be manually adjudicated. Whether a game is immediately restarted or played rather at the end of the round will be decided by the responsible TCEC staff.
As described in the section on tiebreaks, time control will change as of game 33 in tiebreakers.

In the case of a serious, play-limiting bug (like crashing or interface communication problems, not including losses on time) not discovered during the pre-Cup testing, the engine might have the number of cores reduced, have the hash size reduced or have the tablebase access disabled – these changes will then remain for the rest of the Cup.

Under no circumstances are updates to engines allowed once the Cup competition has started.

Because the TCEC Cup works with a different time control, TCEC ratings are not affected by the engines’ results in the Cup. A separate rating list may in time be created for this event and time control.

In situations not covered by the rules, the tournament director decides. 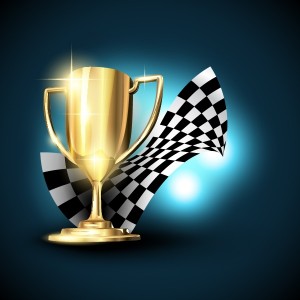