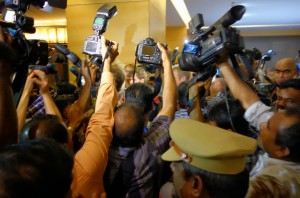 The closing ceremony of the FIDE World Chess Championship in Chennai is going to start at 12:00 local time today. It will be held at the Ball Room of Hotel Hyatt Regency, with the presence of the Chief Minister of Tamilnadu Ms. J Jayalalithaa and the FIDE President Mr Kirsan Ilyumzhinov. The ceremony will mark the end of the possibly the most viewed World Chess Championship in history (expect fascinating statistics) by distributing a hefty prize fund of 2,55 million USD.

The closing ceremony will be with live video and commentary and you can follow it at the official website.

Stay tuned for photos, details, and information all day on Chessdom.com 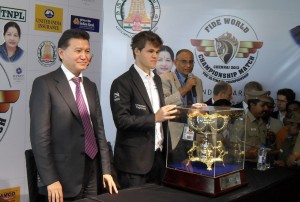 Magnus Carlsen with the trophy

The prize giving ceremony of the FIDE World Chess Championship match between Viswanathan Anand and Magnus Carlsen was held at the Ballroom of Hyatt Regency Hotel in Chennai on Monday November 25.

Grandmasters Susan Polgar and Ramesh RB introduced the ceremony from the TV Studio.

The Hon’ble Chief Minister of Tamilnadu Selvi J Jayalalithaa handed the laurel wreath to Magnus Carlsen, and proceeded to present the players with prize checks – 9,9 crore to Carlsen, 6 Crores 3 Lakhs to Anand.

Anthems of Tamil Nadu, Norway, India and FIDE were performed at the closing.

Back in the TV Studio, Susan Polgar and Ramesh RB shared their final thoughts and signed off the FIDE World Championship live broadcast.