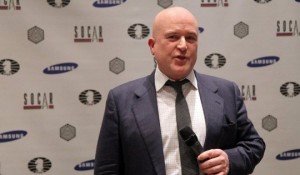 On February 19th, Peter Doggers from Chessvibes.com published an extensive article on the ECF vote of confidence story. In the very detailed report, Doggers brought up an intriguing, little known, story from Andrew Paulson himself. It is an extensive six page report on his Candidacy for Deputy ECU President (download as PDF here), requested by David Openshaw, in which Paulson touches a multitude of topics.

In an attempt to clarify the smoke, Chessdom journalists have contacted Mr. Paulson and he gladly accepted to bring details on each of the topics.

One of the most disturbing points is the allegation that Silvio Danailov has “spent six months in jail for arms dealing (materiel stolen from the Bulgarian army) and as President of the ECU he tried to extract a EUR 50,000 payoff from me [Paulson] in return for having introduced me to the Mayor of Madrid.”

Here is the part 1 of the conversation with Mr. Paulson regarding this revelation, more topics and information will be published on Chessdom in the following weeks.

Chessdom: On several occasions rumors have alluded to Silvio Danailov’s attempt to extort money from you in Madrid. Now we find this in a written form in the mentioned PDF. It sounds quite unbeliavable. Is it true? Why have you been silent on the matter and what is the story behind this?

Andrew: I have been reticent about this because my intentions when I got involved in chess were to remain on good terms with everyone; I am a businessman not a politician. Having negotiated a remarkable contract with FIDE, it made no sense for me to make enemies with anyone, certainly no point in taking sides. I’m very ambivalent about Silvio: we had lovely dinners and lunches in Madrid and I fully enjoyed his company. And, above all, I now understand why he did what he did and forgive him!

Chessdom: But the accusation is public. People are asking about it. Without drawing any conclusions, can you at least tell us the story of what happened? Give us the context to understand the accusations.

Andrew: OK. But I want to make clear that I didn’t judge Silvio harshly at the time. I figured that he was just trying to make some money off of his connections, trying to help me and help himself at the same time. It was not until Kasparov instructed him to sabotage me that I realised that there is nothing innocent in the chess world. As ECU President he shouldn’t have been selling influence with people he only had access to because he was ECU President. What made it worse was that being a willing Kasparov tool he wound up hurting chess.

Chessdom: Please start at the beginning. I don’t understand what you are talking about so far…

Andrew: It all started at breakfast on February 5th, 2012, in Al Ain, U.A.E., the morning after the FIDE/AGON Agreement had been approved unanimously by the Presidential Board. The FIDE people who were hosting me told me that Danailov was a ‘pain in the ass,’ mounting costly, frivolous lawsuits while doing nothing good for chess. I, therefore, decided to become friends with him! My opening conversational gambit over eggs was to ask whether Barcelona or Madrid would be a better choice for a Grand Prix in 2013. He lives outside of Madrid and confirmed that it would be much better and suggested that we meet when I next visited. He was not warm (he is dour), but it was a beginning.

Chessdom: So you met in Madrid?

Andrew: On April 18th, Silvio invited me to dinner in Madrid at the expensive, cooly refined two-star Michelin restaurant El Club Allard. We had a good time; at one point we simultaneously started gagging on the same avant-garde acrid smoking truffle, but both laughed through the coughing imagining the Danailov/Paulson headline in ChessDom announcing our deaths: ‘CHOKEMATE!’

Chessdom: This sounds like the beginning of a great friendship. Was this when you asked him call Kasparov and offer him a place in the Grand Prix Series?

Andrew: Yes. That offer was not entirely serious; what I wanted was to engage with Garry and get him to come and do some commentary, which he agreed to do, ‘depending on the financial conditions.’ Anyway, back to Danailov: I agreed to hold the Grand Prix in Madrid and he offered to try to arrange a meeting with the Mayor whose support he said would be useful. Two months later, Danailov sent me an urgent email and I returned on June 26th to meet with the Mayor. It was all very mysterious; I was whisked in to her office, talked about chess and was whisked out. I assume it was the Mayor! It was a very odd meeting: Silvio didn’t talk much (he’d never met the Mayor before) but made sure that he was the intermediary for further communications.

Chessdom: Did the Mayor make any promises? Or did Silvio, or did you?

Andrew: Well, the Mayor was wonderful, sparkling, intelligent, excited and said that she fully supported chess and would help in any way she could. Danailov led me off to a nearby hotel where he demanded €50,000 for introducing me to the Mayor and promised to get us a splendid venue for free for the Grand Prix. I didn’t consider whether it was ethical for him to make this offer to me, but my first impression was that it seemed acceptable for me to consider accepting it: if we paid Danailov a €50,000 fee to lobby for our Madrid event, we could save €200,000 in venue costs. So as to gain time to consult my lawyers, I said that this was reasonable and would depend on the venue and the terms (what is ‘free’, for example) and he should get back to me with some concrete details. The Mayor was so genuinely interested, it seemed to me that I didn’t really need Danailov; but if I didn’t pay the €50,000 I would no longer have access to the Mayor!

Chessdom: So what did your lawyers say?

Andrew: We never got there because Silvio never gave me any details. Kasparov ordered him to pull the plug. On July 12th, Stephen Moss wrote an article about me in The Guardian that triggered Kasparov’s rage. He decided that he had to put me ‘in my place,’ so he started rallying his ‘assets.’ During the course of the following weekend he spent many hours on the phone haranguing two of them. The first was a major chess journalist whom he tried to convince to write an article denouncing me; the journalist resisted.

Chessdom: Who was the journalist?

Andrew: Of course, I can’t tell you that.

Chessdom: What was Kasparov angry about?

Andrew: Well, two things. Malcolm Pein thinks that the very first time Kasparov heard about me (the AGON contract), his strategic genius kicked in and told him that I was the small, fleeting detail at the beginning of the movie that was going to come back to bite him in the end. The trigger cocked. The Guardian journalist had recounted that I had asked Kasparov to play in the Grand Prix; I was poking him. The trigger pulled.

Chessdom: Who was the second person Kasparov called?

Andrew: That same weekend Kasparov was on the phone bullying Danailov to back out of our arrangement: the last thing he wanted was having one of his ‘assets’ helping me. Danailov obeyed and wrote an email to me on July 20th: “Right, we have an agreement and everything is clear. In that case, please made the first payment according to the agreement on the account attached till August 1th [sic] to keep going.” I was still waiting for details and he surprises me with a payment deadline eight days thence! On July 24th, I responded: “As to payment, we can agree on the amount, €50,000, but not on the timing…” He answered on July 29th demanding with details: “You will be shown the three venues on August 8th, only in case you fulfill [sic] your part of the agreement [paying the money] before August 1th [sic]. This is my last offer, you can take it or leave it.”

Chessdom: So, you mean that under orders from Kasparov, Danailov pulled out of a deal that could have made him €50,000.

Andrew: Well, he would have had to make a payoff to someone in the Mayor’s office, I suppose, so it wasn’t all profit. For me, the worst part was that Danailov made it impossible for me to hold the Grand Prix in Madrid, he poisoned the well. I still regret this as Silvio is not a bad guy; he’s just from a different time and place and he’s just trying to fit in and make his way.

In the following days Chessdom will contact Silvio Danailov for an interview on the topic.