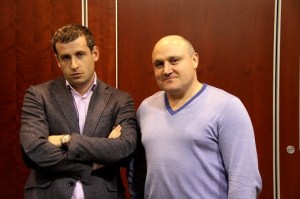 The RCF representatives must be dissapointed

The seventh round of the Aeroflot Rapid Qualifier has finished with draws on the first 8 boards, thus keeping exactly the same leaders at the very top, Rauf Mamedov and Sanan Sjugirov. At the same, the chasing pack grew extensively; now there are 20 players that stand one point behind the leader.

One of the flaws of the system used this year presented itself in the very beginning of the 8th round. Since there are 32 spots to qualify and most of the players are professionals who are trying to at least earn some money from qualifying, they have started to see what’s best for themselves: making quick draws.

10 out of 16 games finished in draws that lasted less than 5 minutes. Some of the players had the decency to at least play eight moves, but some of them just shook hands after three moves were played. For example: Efimenko – Kashgaleyev, Chadaev – Guseinov, Smirnov – Reshetnikov, etc.

This incident will comes as a surprise for the chess world because one of the ideas behind creating a rapid tournament instead of a classical one was to increase the entertainment value for the spectators.

Update: GM Gata Kamsky proved why he has stayed so long on the elite by beating the tournament leader Rauf Mamedov in 30 moves. The only decisive game on the top boards came precisely in the first one. Bravo Gata!