Greek WGM (and multi-champion) Anna-Maria Botsari, together with the Ukrainian IM Ihor Nester with 5.5/6 are leading the field of the 35th International Chess Tournament “Ikaros” 2012 that is under way at Aghios Kirykos, the capital town of Ikaria island in Greece.

Close to the leaders are the Hungarian GM Peter Prohaszka, the Finn IM Miika Maki-Uuro together with Giorgos Goumas and Kleanthis Vafiadis, all with 5/6, and after them there is a group of 21 more players with 4/6, all seeking to reach a higher position in the rankings.

The contenders for the title of the Aegean Champion 2012 (i.e. the best player coming from a club in the Aegean region) are Alexandros Koukoufikis, Stavros Lazaridis, Vassilis Sarandos, Hrysanthos Pountzas, Nikos Xenakis, Giorgos Koutsompinas (all from Ikaria Chess Club!) and Christos Gialias from Chios Chess Club.

Among female players, the indisputable favorite for the Female Aegean Champion is Stefania Koukoufiki. 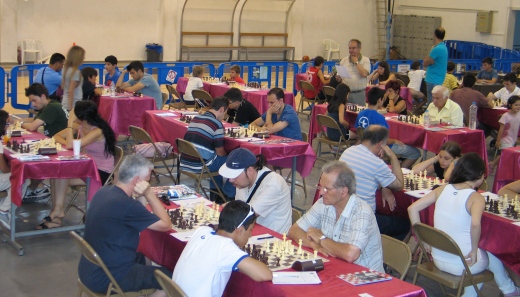 Participation in Ikaros 2012 is larger than what was initially expected

“Ikaros” Chess Tournaments commenced in 1978 and since are held every summer at Ikaria. The first events were mainly small local tournament but from 1983 “Ikaros” went nationalwide and since 1991 it became an international event. During these 35 years thousands of chessplayers from five continents have taken part in this long chain of tournaments!

Probably the most famous participant of Ikaros is the Russian ex-world champion Alexandra Kosteniuk who visited Ikaria as an upcoming young player who impressed everybody with her sparkling play and results against many strong opponents.

In this year’s Open Aegean Championship “Ikaros” 2012 there are 137 participants from 6 countries. During the first 6 rounds, 397 games were played of which 194 ended with a victory for white pieces, 158 with victory for black pieces, 41 ended with a draw, while 4 games ended without the games to be actually played.

Open Aegean Championship ends on Saturday (the last round is on Saturday morning and the closing ceremony will take place in the evening at the Sports Center of Aghios Kirykos). On Sunday 15th of July follows the 3rd Mediterranean Rapid Team Tournament, while on Friday 13th of July in the morning, the annual problems solving competition will be held.

This year’s edition of “Ikaros”, that is characterized by the (somewhat unexpectedly) large number of participants (covering a large range of age from 6 to 83 years old players) and the low average age (the lowest in the long chain of Ikaros tournaments) is organized mainly with the support of the Municipality of Ikaria (http://www.dimosikarias.gr/index.php) and the main sponsor ANEK Lines (http://www.anek.gr).

The chess events will continue through the summer and as a part of of the centennial celebrations for the Revolution and Liberation of Ikaria on 1912. The chess events include simultaneous exhibitions, blind and rapid tournaments, reenactment of famous games on a “live” board (the pieces will be young children) and many others.

Information about all events of Ikaros 2012 can be found at: http://www.ikaroschess.gr

International Chess Tournament Negroponte 2012 (Postponed)
Update, 25th July: The Chalkida Chess Academy is forced to postpone the staging of the "Negroponte 2012" tournament from its original dates of August ...