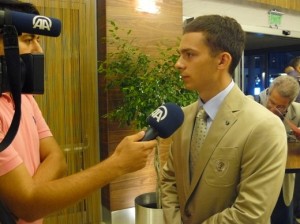 The 2018 Spring Chess Classic was an exciting event by the STL Chess Club, comprised of two 10 player round robins. The A group was won by GM Jeffery Xiong who scored 6,5/10 and with the ELO gain will return to the world top 100 players. (replay the games with analysis here)

One of the most interesting games of the round occurred in round 8 between GM Samuel Shankland and GM Alexander Ipatov. Shankland opened with 1.d4 and everyone thought there must have been a transmission error when Ipatov’s reply was reported as 1…Na6. However, the move was correct and it was about to get stranger. 2.c4 was met by 2…e5. GM Ipatov twitted after the game, “after 10 mins of creative over-the-board brainstorming of what to play against the always well-prepared Sam Shankland, I played a novelty as early as move 2. My 17 million game database confirms that! […] Mega+Engine+Correspondence databases all in one!”

The game continued for 39 moves and finished in a draw. Scroll down to replay with analysis.

Nelson Hernandez on the move 2 novelty by GM Ipatov

Top Chess Engine Championship’s in-house openings chief, Nelson Hernandez, using his considerably larger “Catobase” commented on Shankland – Ipatov, “Traditionally, the word ‘novelty’ has only applied to new positions obtained by titled players. By that definition GM Ipatov is absolutely correct; his opening has never been seen in human tournament play at any level. However, a looser definition which takes into account sources of games that have traditionally not constituted “chess theory”–engine games, games between club players, games played on Internet servers by anonymous nicks–reveals that at least six games have achieved the unusual position after 2…e5.


Three such games were seen on FICS between nicks rated over 2000 during 2012 and 2013. Three more games were played between two versions of the Komodo (which in 2015 hit major headlines) as part of an opening book test. Interestingly, when humans were playing on FICS the black players scored 3-0–possibly an indication that the unorthodox opening rattled the white players. Conversely, when engines were playing, the disadvantage black was conceding with these moves resulted in a 2.5-0.5 edge for white. Shock tactics don’t work so well against engines!”

GM Alexander Ipatov: I wanted to avoid theoretical discussion and have a fresh position right out of the opening. It is well know that Sam has been in Carlsen’s team for a while and knows openings extremely well. I hadn’t prepared this line in advance; I just came to the board and started thinking how to deviate. Both 1…Na6 and 2…e5 came to my mind over the board. The position after 14 moves is -/+. I should have played 15… Nac5 instead of 15… f5 in the opening. In the endgame, I was closing to winning as well. After the game, I spent some time analyzing with ChessBase Cloud engines (44 cores). They give -1.5 to Black in comparison to online server analysis of -0.2 or so. I should have played 33…Bf5! (or 33…Kc6!). If my opponent did the same as in the game – 34.Rd2, then it is all lost to White in a study-like way – 34…Rxd2 35. Kxd2 c5 36. Kc1 a3 37. f3 Bd3! -+ and the black king slowly marches towards b3 with the idea a3-a2. White is helpless. The best what can White do is to push his e-pawn and promote the queen. However, Black will promote his a-pawn with check and win nearly all White’s pawns. The resulting opposite-colored bishop endgame is lost for White. That would have been a fantastic game, had I seen that!