Birth day boy Abhijeet Gupta of PSPB celebrated with a win over his team mate MR Venkatesh to keep his lead over his nearest rival GN Gopal also of PSPB and Deepan Chakravarthy of Tamil Nadu, after 8 rounds of the National Premier Chess Championship, organised by Marathwada Chess Association at MIT, Aurangabad.

Abhijeet has collected 6.5 points, while the other two are on 6 points. P. Shyam Nikhil of TN and Tejas Bakre of Indian Airlines have scored 5.5 points.

Both Abhijeet and Deepan had similar positions against their respective opponents Venkatesh and Deep Sengupta with two pawns and rook against rook and both also ensured the wins. 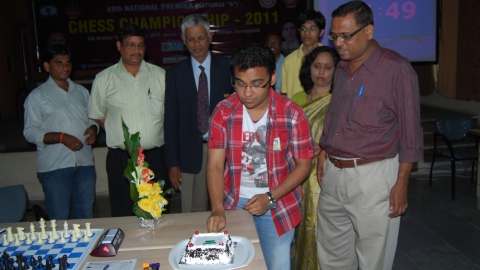 In an absorbing tussle, both Gopal and Sethuraman fought for supremacy in a Slav defence played by Gopal. Sethuraman sacrificed his knight for three pawns but was forced to give back the piece later. Gopal’s two bishops and the queen played havoc on the king side. When it was Gopal’s turn to sacrifice his bishop on 27th move, the result was clearly written on the wall and Sethu gave up the fight.

Padmini Rout hailing from Orissa proved that her win over defending champion Parimarjan Negi of PSPB was no fluke, when she scalped 2009 national champion B Adhiban also of PSPB. When she gave up her pawn on seventh rank to get opponent’s bishop in favour, Adhiban had no hesitation to resign. With this win, Padmini has earned her deserving second IM norm.

Tejas Bakre of Indian Airlines scored over Asian Junior champion M. Shyam Sundar of TN using the advantage of his two rooks against Shyam’s rook and bishop. Negi also improved his chances when he downed S Satyapragyan of Indian Airlines.

In the Samisch variation of Kings Indian defence, school boy G. Akash of Tamil Nadu made some stunning moves to sacrifice his rook against much experienced grandmaster Neelotpal Das of PSPB. Akash needed only 31 moves to demolish Neelotpal. P. Shyam Nikhil of TN enhanced his norm chances by defeating Vikramaditya Kulkarni of Railways.

Playing Philidor defence, MR Lalith Babu of PSPB took command of the centre with his e- and f-pawns against former national champion Pravin Thipsay of Maharashtra. Thipsay resigned after 40 moves, when Lalith’s rook, bishop and knight also joined the attack, in addition to the queen.

Aswin Jayaram of Tamil Nadu played some enterprising moves against Railway’s IM Saptarshi Roy resulting in the gain of a bishop. Aswin’s 34th move of Qe5 sealed the fate of Roy.