Abhijeet Gupta of PSPB enhanced his lead to one point by defeating P. Shyam Nikhil of Tamil Nadu in the tenth round of the 49th National Premier Chess Championship, organized by Marathawada Chess Association at MIT campus, Aurangabad, today.

While Abhijeet is on 8 points, Tamil Nadu GMs Deepan Chakravarthy and SP Sethuraman and GN Gopal of Kerala are on 7 points.

In a miniature game of Slav defence, Shyam Nikhil played the first ten moves correctly. When Abhijeet played Qc2, he was confused and not prepared for it. His immature counter attacks on the queen side paved the way for Abhijeet to trap Shyam’s bishop at a4. Immediately, Shyam resigned on the 23rd move. 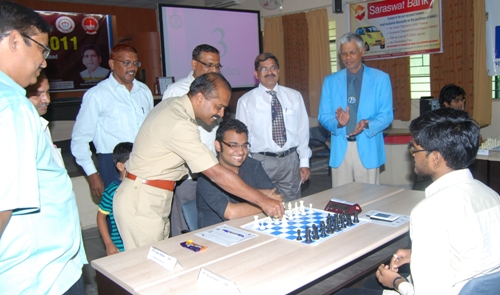 An absorbing game that went into full distance was between former world under-16 champion SP Sethuraman of Tamil Nadu and GM Tejas Bakre of Indian Airlines. Sethuraman offered a knight sacrifice on 29th move in the Semi Slav system followed by Tejas. Tejas did not accept the offer. The knight still hanging, Sethuraman gave up the other knight also. After exchanging the queens on 42nd move, Sethuraman was triumphant in the same colour and bishop and pawns ending, after well fought 90 moves.

In a closed position of English opening, both 2010 runner up GN Gopal and the Paris Open champion S. Arun Prasad from PSPB did not want to jeopardize their chances and had a safe draw in 30 moves.

So was the Ruy Lopez game between the grandmasters Deepan Chakravarthy of TN and Abhijit Kunte of PSPB, which was also a 30 mover draw. 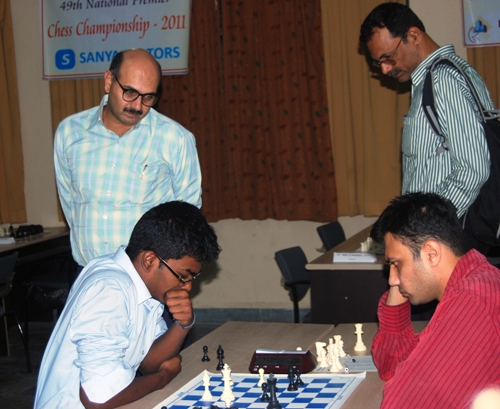 Deep Sengupta, a former winner of Doeberl Cup in Australia, demolished former Asian Junior champion P. Karthikeyan in just 22 moves of a two knights defence game. Karthikeyan resigned, immediately after playing Nxf4, realising that he was about to lose a piece and also the game.

Former champion B. Adhiban of PSPB destroyed the king side pawn structure of GM Sriram Jha of LIC in the Samisch variation of Kings Indian game. Adhiban’s two bishops playing in tandem, ably supported by the queen, tilted the game in his favour in 32 moves.

Sundarrajan Kidambi of PSPB did not exert much to win in a rook and pawns ending against Railway’s IM Saptarshi Roy, with two extra pawns to his credit. The Ruy Lopez game wherein Roy had white pieces lasted 40 moves.

G Akash of TN held 2010 champion Parimarjan Negi of PSPB in 42 moves of a Sicilian defence, followed by Negi. Though Akash had a g- pawn in a rook vs rook ending, he could not convert it to a win. 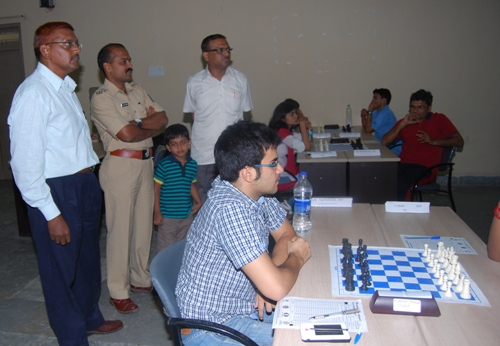 Defending champion Negi is ready to start the game. At the right is the organiser Vijay Deshpande.

In the clash between two youngsters, WGM Padmini Rout of Orissa suffered her second straight loss at the hands of Vidit Santosh Gujrati of Maharashtra. In the same colour bishop ending, Vidit’s two extra pawns did the trick for him.

Double GM norm holder MR Lalith Babu, the national junior champion in 2010 surrendered meekly to former world under 10 bronze medalist MR Venkatesh. Though Lalith was exchange up, he could not prevent the promotion of Venakatesh’s c- pawn to a queen. The rest was mere routine. 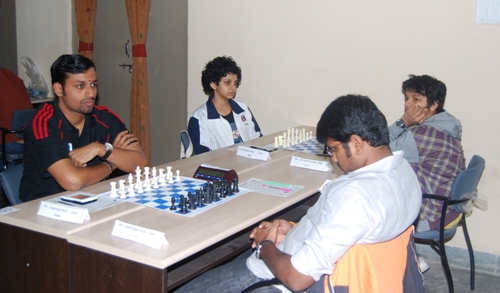