Abhijeet Gupta of PSPB maintained a slender half a point lead over SP Sethuraman, Deepan Chakravarthy both from Tamil Nadu and GN Gopal of Kerala after six rounds of the 49th National Premier Chess Championship, organised by Marathwada Chess Association at the MIT campus today.

Abhijeet has collected five points from six games and nine players are on the third spot with four points each.

In a game arising out of French defence by GN Gopal, he and Abhijeet did not take any risk and played the 30 moves, the minimum required before agreeing for a draw (according to tournament regulations) and signed the peace treaty. 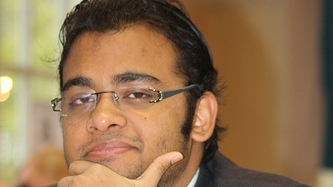 On the second board, former world champions in age categories, Deep Sengupta of West Bengal and Sethuraman played out a passive draw in a rook and opposite colour bishop ending, resulting from the Meran variation of Slav defence.

In an absorbing tussle, MR Venkatesh, an international master from PSPB played Nimzo Indian defence against GM Tejas Bakre of Indian Airlines. Both played aggressively targeting the enemy kings. Though Tejas had an extra pawn, it could not fetch him any advantage and they settled for a draw.

Answering the Grunfeld defence by former Asian Junior champion Deepan Chakravarthy of Tamil Nadu, twice Asian Junior champion Ashwin Jayaram also from the same state launched a premature king side attack. Deepan not only nullified the threats, but combined his rook and queen beautifully to gain a big advantage. Ashwin had to resign in 28 moves.

Players from Maharashtra had mixed luck today. Twice national champion Abhijit Kunte’s f-pawn played a stellar role in bringing victory to him in 36 moves against Satyapragyan of Indian Airlines in a Sicilian defence adopted by Abhijit.

Like Abhijit, another Maharashtra player Vidit Santosh Gujrati played Sicilian, but landed on the losing side against Saptarshi Roy of Railways. Roy sacrificed a piece first to grab three pawns and got the piece also returned soon. He outplayed Vidit in 48 moves.

Koshy of PSPB overlooked a fork of his king and queen by Vikramaditya Kulkarni’s knight to lose in 52 moves.