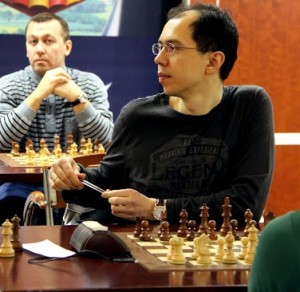 The first seed of the rapid Aeroflot qualifier, American GM Gata Kamsky, has signed a rather quick draw in the third round against a lower rated opponent, GM Zaven Andriasian from Armenia (2569 Elo).

Kamsky has already bounced back in the 4th round with a victory and stays well within the 32 players field that will qualify to the Final stage of the tournament. Even though this might seem like an easy task for a player of Kamsky’s level, it’s enough to take a look at the list of participants to see that this is not so simple. The 32nd seed is precisely the recent winner of the Moscow Open, GM Boris Savchenko.

Gata is the leader of a 3 player contingent that represents the USA, together with GM Ildar Ibragimov and GM Maxim Dlugy.