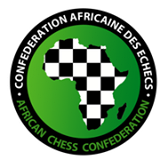 The 2015 African Junior Chess Championships has now concluded in the paradise island of Seychelles.

The total number of participating federations is 13 with representation from all the four African FIDE Zones.

In the Open Section the field of 24 players is headed by the top seed IM Adham Fawzy of Egypt.

In the Girls Section, which comprises 13 players, the top seed is WIM Shahenda Wafa of Egypt.

The 13 participating federations are: Algeria, Angola,Burundi, Egypt, Kenya, Madagascar, Morocco, Nigeria, Seychelles, Somalia, South Africa, Zambia and Zimbabwe.The President of the African Chess Confederation welcomed all participants to the final event of the 2015 African Continental tournament calendar and wished all participants a memorable stay in the beautiful island of the Seychelles.

In the Open Section, IM David Silva from Angola finishes a full point point ahead of all his peers. A commendable 8 points in 9 rounds of play secured him the victory. First seed IM Adham Fanzy manages 7 points and wins the silver medal. FM Cristiano Aguiar, also from Angola, wins the bronze with 6 points to his name.

In the Girls section, WIM Shahenda Wafa from Egypt triumphs, keeping a full point ahead of the competition and ending the tournament with a score of 8.5, with a near perfect 8 wins and 1 draw. Silver is for WIM Maria Domingos from Angola and WIN Ehab Tasneem from Egypt grabs the bronze, both with 7.5 points.

Round by round reports