The 2015 African Youth Chess Championship is taking place from 5th to 13th December at the Golden Peacock Hotel in Lusaka, Zambia.

About 260 kids from 14 countries are taking part in the competition. Nearly 500 guests in total make this event a memorable one in the history of ‪‎chess‬ in Africa.

The opening ceremony of African Youth Chess Championship 2015 was held in the presence of the Zambian Minister of Youth and Sports, the Deputy-Minister of Health and Patron of the event, the President of African Chess Confederation, Zambian Olympic Committee members, Zambian National Sports Council members, the President of Zambia Chess Federation, the Ambassadors of participating countries and more than 250 kids and parents.

After the different welcome speeches, the Patron of the event, Deputy-Minister of Health played a blitz match against the highest rated participant, an IM from Egypt, and the competition has been declared open by the Minister of Youth and Sports. 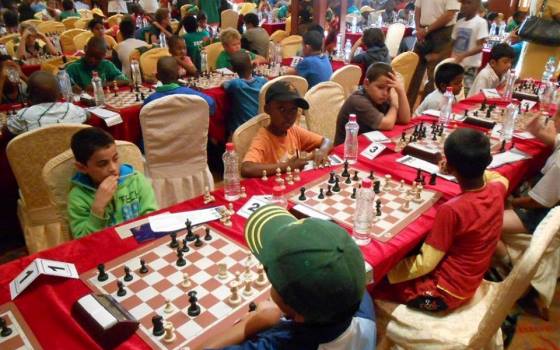