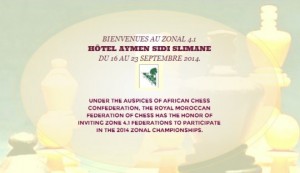 The Royal Moroccan Federation of Chess has the honor to invite all Chess Federations in Zone 4.1 affiliated to FIDE, to participate in the 2014 Zone 4.1 Open and Women Championships.

The Championships will be held from the 16 to the 23h September 2014 in Sidi Slimane, Morocco, under the auspices of African Chess Confederation.

The tournament will be held at Aymen Hotel which is about 1 hour from Rabat, the capital city of Morocco. The playing hall and lodging facilities are all encompassed within Aymen Hotel.

In accordance with FIDE regulations statutes, the Zone 4.1 Individual Championships are open to all players from Federations within Zone 4.1 region which are affiliated to FIDE.

Registration forms for entries can be found on the official website. Federation officials must fill them in on or before 10th September 2014 and sent them strictly by e-mail to: frmechecs1963@gmail.com , or amzal90@gmail.com.

The Championships will be played in accordance with FIDE regulations as a 9 Round Swiss System tournament. Time control will be 90 minutes with an increment of 30 seconds per move starting from the first move.

Draw offers are not allowed before Black’s 30th move. The zero tolerance rule will apply. A player arriving late at the start of the round loses the game.

The winners in each section will also be awarded FIDE titles as follows:
a) Open Section: IM, FM
b) Women Section: WIM, WFM

The host Federation shall provide free full board and lodging during the tournament on sharing basis for 2 players in each participating Federation; 1 player who will be in the Open section and 1 player in the Women’s section.