The agreement between FIDE and ACES EUROPE for the promotion of chess in schools in Europe was signed last night in Valencia by the FIDE President Kirsan Ilyumnzinov, FIDE Vice-President Ali Nihat Yazici, ACES Europe President Gian Francesco Lupattelli and Vice-President of the association John Swanson.

The Agreement stands for the creation of European CIS Towns (CIS – “Chess in Schools”), as the part of “European Towns of Sport” Award – ACES EUROPE project which was recognized and supported by the EU ten years ago and has been running since.

The meeting was followed by a dinner during which the true spirit of the agreement and cooperation was evident with satisfaction for all: President Lupattelli officially handed over the invitation to FIDE for the next ACES EUROPE event on the 6th of November 2013 to be held in the European Parliament, and FIDE President Ilyumzinov replied inviting him to visit Moscow and the sports sector of the city.

News by FIDE and FSI 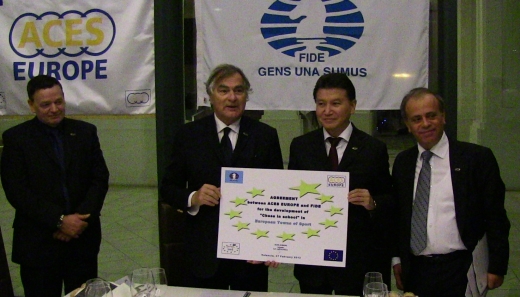