Round 3 Video by Vijay Kumar

Negi was caught off-guard in the opening itself never quite recovered while Sasikiran misplayed a promising position to lose to Korobov.

In the other game of the day, former World Junior Champion Abhijeet Gupta played out an exciting draw with top seed Radoslav Wojtaszek of Poland.

After a highly combative day in the Rs. 12 Lacs prize money tournament, Korobov joined Wojtaszek in the lead on two points from three games while Gupta, Negi and Alekseev now follow the two leaders a half point behind. Luck-less Sasikiran is now alone at the bottom of the tables with just a half point from his three games.

With seven rounds still to come in the six-player double round-robin tournament, much excitement is to be expected if the first three rounds are anything to go by. The no-draw-offer rule in place here is serving the cause to provide high-quality fighting chess, something the Indian Chess Federation and Airports Authority of India had hoped for when conceiving the idea.

Negi started with the Sicilian defense with black and it was surprising to see the extremely slow pace of the game against Alekseev. The Russian thought for a long time right from the beginning and Negi had to do the same after he made an error while trying to work out the plan in an unknown position.

Alekseev’s tactics to go for the unique move-order paid off high dividends. Negi lost a pawn early in the opening and was left to defend a difficult endgame once the queens got traded. Both players ran in to time trouble but white’s position was obviously easier to play. Alekseev won in 55 moves showing immaculate technique.

Korobov won against Sasikiran from a Queen’s Indian defense game where the latter played white. Sasikiran was quite creative in the middle game as he exerted pressure from a balanced position on the king side and it looked as though the Indian would prevail in quick time.

Korobov was however not intimidated by white’s advantage and collaborated after the game that he believed he had counter-chances all along although the position looked dangerous.

On Sasikiran’s part, the clock yet again played the pivotal role as the Indian fell way behind and at one point had 12 moves to make in just over three minutes. With the nature of the position very complicated it was not easy to find the best moves and Sasikiran lost track to allow invasion of black queen. Once on top, Korobov finished in style, opening the king side at the right time. The game lasted 47 moves.

Abhijeet Gupta misplayed the Benoni opening as white and was suffering against Wojtaszek when suddenly a wave of tactic strokes enthused life in a lost position for the Indian. Though short of time, Gupta found some remarkable tricks in this edge-of-the-seat thriller and the draw through repetition was a just result as both players missed out on capitalizing winning advantage. 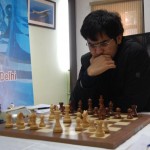 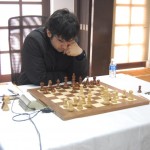 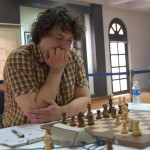 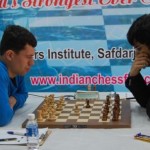