Round 4 video by Vijay Kumar

Aided by the victory Korobov took his tally to three points out of a possible four and the Ukrainian now enjoys a full point lead over Wojtaszek, Evgeny Alekseev of Russia, Parimarjan Negi and Abhijeet Gupta who all have two points each.

On another interesting day the other two games ended in hard fought draws. Krishnan Sasikiran yet again could not capitalize on what appeared to be a huge advantage while Parimarjan Negi also missed some chances to let Abhijeet Gupta off the hook. 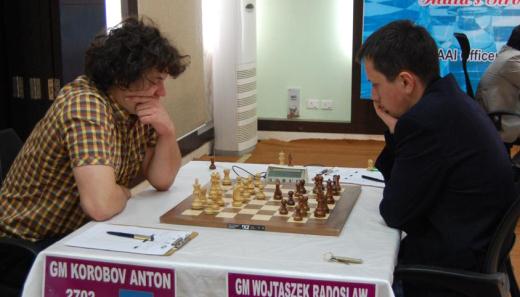 With six rounds still to come in the category-18 tournament, Krishnan Sasikiran remains at the bottom of the tables with just one point from four games. Sasikiran has been getting nice position but so far he has not converted those in to full points.

Abhijeet Gupta is the other player in the tournament who is yet to score a victory apart from Sasikiran and with four draws in as many games, the former World Junior Champion will be hoping to turn the tide in the rounds to come.

Korobov confessed he was not happy with his position out of the Petrosian system in the Queen’s Indian defense. Playing white the Ukrainian champion was on the defensive right from move 15 and it was only a blunder by the Polish Grandmaster that gave him winning chances. Soon after the first time control Korobov spotted a tactical opportunity and went on to win a pawn. The technicalities thereafter looked easy the way Korobov played it. 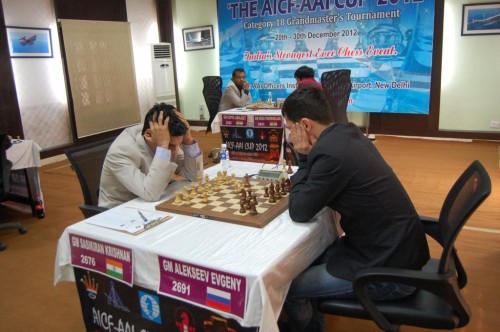 Sasikiran employed the Catalan opening and the players followed theoretical lines that gives white a miniscule advantage. Alekseev however fought well in the middle game to keep the balance but an erroneous plan left the Russian to suffer for a long time. Sasikiran should have won with correct play but in the second time control the Indian missed chances and Alekseev equalized with some imaginative display.

Gupta and Negi were involved in the longest game of the tournament so far lasting 104 moves. From a Grunfeld, Gupta went astray after the trade of queens and lost a handful of pawns and it looked massacre. However, there were some tricks left and Abhijeet spotted almost all of them to reach two pawns down rook and pawns endgame. As it turned out, it was a theoretical draw and though Negi made Gupta suffer for a long time, the result was anyone’s guess. 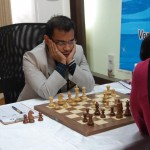 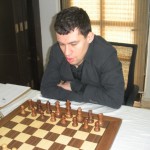 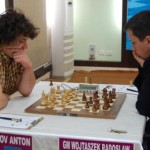 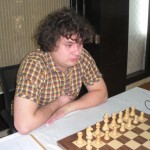 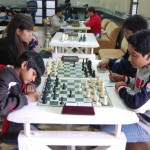 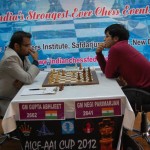 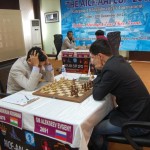 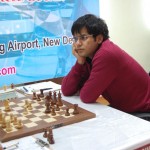 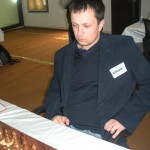 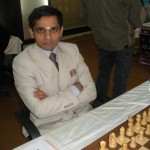 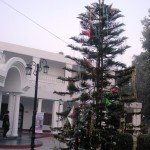