India is to stage eight International Open tournaments in a year, said Bharat Singh Chauhan, Honorary Secretary of the AICF here at Chennai on June 3, 2012. The first four events are the Parsvnath Delhi, Chennai Open, Orissa Open and the Mayors Cup of Mumbai. The last four are to be played in Nagpur, Pune, Gurgaon, and Andhra Pradesh.

Bharat Singh said the focus is to improve basic facilities to players like Tournaments Halls and Lodging.

From 2013, Bharat Singh said the National Premier will revert back to all-play-all Round Robin format. The new format will be, nine players qualifying from National Challengers, four top rated, one previous champion in a 14-player event. The AICF will fund the organizers six lakh and the prize money will be Rs.10 Lakhs. Only Anand will not be required to play National Premier which means the 2650 rating cut off to be in Indian team will go.

The AICF will organize two Grand Master closed events per year, one for men, one for women. This will cost the AICF Rs.20 Lakhs. Twelve lakhs for men, eight lakhs for Women.

Prize Money of most of the National Championships are set to be increased said Bharat Singh. “For example, Under-7 will be doubled from Rs.75,000 to Rs.1.50 Lakh”, he said. However, there is no increase in the entry fee, he said.

The funding of National Men (6 Lakh), Women (3.5 Lakh), Two GM Events (Rs.20 Lakh) will total Rs.30 Lakhs. Increase in awards for Asian and World events will cost AICF up to Rs.50 Lakh per year observed Bharat Singh. On the Government side, Bharat Singh said the support was big and we are able to send more players to events like Aeroflot open etc.

For the first time, AICF meeting is delayed as we wanted to Honour our World Champion who has just retained his title, said Bharat Singh. 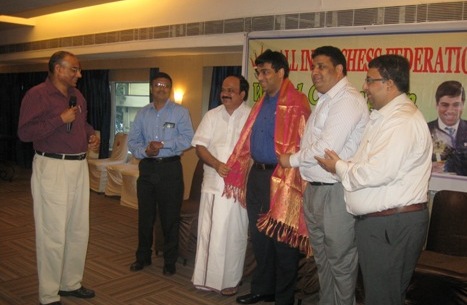 Two New Nationals From This Year

Two new tournaments have been included in the list of National Championships from this year. AICF approved this at its Annual General Meeting at Chennai on June 3, 2012.

From 2013, Indian Teams will consist of four top rated players and National Champion for team events alone. For exposure trips and all other purposes, top six from Nationals will be considered.