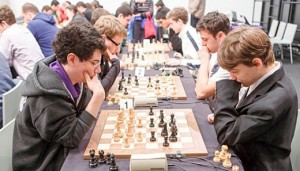 The 2013 US Chess Championship had a very exciting final round. Three players arrived to this round half a point behind sole leader Gata Kamsky. The clear favorite only managed to draw his game against Ray Robson and Alejandro Ramirez beat Larry Christiansen. Kamsky and Ramirez will play a two game rapid match with a time control of 25 minutes + 5 seconds increments to decide the champion.

Gata Kamsky needed a win to take clear first, but he had to face the very strong GM Ray Robson. The youngster played fearless chess against the favorite and seemed to be on top after the complications. He survived a very dramatic time trouble phase and ended up in a drawish position, which he managed to hold in 44 moves.

Alejandro Ramirez has shown a great level during this event. He confirmed his good form with a clean victory over veteran GM Larry Christiansen. The young Ramirez – who was born in Costa Rica – achieved a solid advantage in the middlegame and closed the deal using his very strong passed d-pawn in combination with threats to Christiansen’s king.

Alexander Onischuk seemed to be the favorite to catch Kamsky in the last round. The Ukraine-born player had the white pieces against lower-rated Kayden Troff. However, Troff maintained the good form he has shown throughout the event and held the draw without any problems. This game was also very important for him, as he obtained a GM-norm thanks to his great overall performance.

The young Conrad Holt, on the other hand, seemed to be the underdog against second seed Timur Gareev. However, Holt was on the driving seat during most of the game, and it seemed like a triple tie on first place was very likely. The disaster for Holt came in the endgame, where Gareev showed his experience and outplayed his young opponent to get the full point.

Irina Krush won the women’s event with an astounding 8.5/9. Expect a full article about her performance later at Chessdom.com.