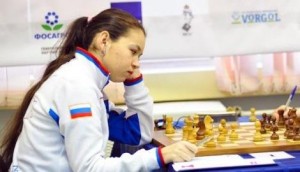 Aleksandra Goryachkina is the winner of Women Russian Cup after a heated competition that took place in Khanty-Mansiysk from the 4th of December, with the final round being on the 10th of December.

After defeating Travkina and Charokina, she faced WIM Alina Bivol in the finals, where Goryachkina won the first game and secured the title with a second game draw. Both players have won top national events earlier this year – Goryachkina winning the Women Championship, while Bivol won in the U20 Russian Individual Championship. This final came as culmination of a great season for them.

This title is yet another success in the brilliant career of Goryachkina. She became WGM at the age of 13 and among the many gold medals in her career are the Russian Cup 2012, the World U18 Championship, theWorld Junior 2013, the World Junior Championship 2014 (one round earlier), Lyudmila Rudenko Memorial, 100 years Botvinnik, and many more.

More about the Russian Cup

The men’s section of the competition is still going on, follow the final games live here