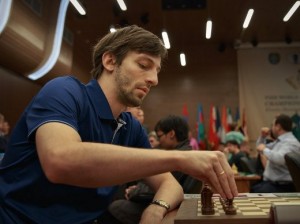 Alexander Grischuk is the 2015 World Blitz Champion! Congratulations! Grischuk grabbed won the gold in a dramatic final round, adding a third World Blitz title after his victories in 2006 and 2012.

After the first day and eleven rounds of play Maxime Vachier-Lagrave from France emerged sole leader with 9,5/11 points. He lost only to defending champion Magnus Carlsen and conceded one draw, to Teimour Radjabov.

The second day of the tournament was a real roller coaster with ups and downs in every player’s performance. Carlsen was the first to slump starting with 1,5/5. Vachier-Lagrave took 1,5 points lead four rounds before the end, but consecutive losses allowed opposition to catch up. The final round started with two Russian players as co-leaders – Kramnik and Grschuk, while Ivanchuk and Vachier-Lagrave were half a point behind them.

Ivanchuk had serious chances to defeat Kramnik with white, but after a long struggle Kramnik managed to get half a point. However, that was not enough as Grischuk was merciless in his game against Gelfand, and secured the 2015 World Blitz title.

Vladimir Kramnik remained with the bronze medal with equal points but worse tiebreak than the silver medalist Maxime Vachier-Lagrave.