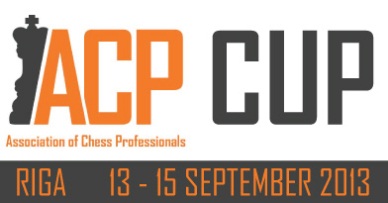 The 2013 ACP Cup took place on 13-15th September at the Rietumu bank headquarters in Riga, Latvia.

The last day of the tournament was reserved for the Semi Finals and Final.

In the first session Alexander Grischuk eliminated his compatriot Peter Svidler (1,5-0,5) thanks to the victory with black pieces.

The second Semifinal lasted a little longer. Ruslan Ponomariov won the first game, but Ian Nepomniachtchi struck back to even up the score. According to the regulations (read about the format here), two blitz games were to follow. Nepomniachtchi won both games to qualify for the Final with overall 3-1 victory.

The Final match between Grischuk and Nepomniachtchi saw both rapid games ending in draws.

Grischuk then won the first blitz game but Nepomniachtchi made another comeback and equalized in the second.

It was only fitting to decide the outcome of the exciting tournament with an Armageddon game. Grischuk played white with 5 minutes on the clock while his opponent had 4 minutes and draw odds. However, white played aggressively and obtained material advantage which he later converted into a full point. Congratulations to the winner!

The tournament was organized by the Association of Chess Professionals (ACP) and Latvian Chess Society.

The ACP Cup was a Knock-Out tournament with sixteen participants.