The Russians were not ready to be dismissed by the Chinese and rose to the occasion in the 12th and penultimate round of the LIC World Junior Chess Championship which is in the concluding stages at Hotel Hyatt in Pune.

Alexandra Goryachkina scored a thumping Grand Double, successfully defending her title which she won at Turkey last year with a round to spare in the Girls section by defeating Srija Seshadri.

Her compatriot Vladimir Fedoseev, the top seed opened the doors towards the title in the open section to keep the contest alive just when the Chinese appeared to be running away with the title. In an exciting tussle on the top board, Fedoseev defeated sole leader Wei Yi to share joint leader status

Goryachkina has tallied a whopping 10.5 points and maintained a clean slate. Ann Chumpitaz of Peru is trailing in second place with 9 points, Sarasadat Khademalsharieh follows next with 8.5 points and Padmini Rout, Srija Seshadri along with three others are bunched together with 8 points. Tomorrow , on Sunday the final round will commence at 10.00 AM. 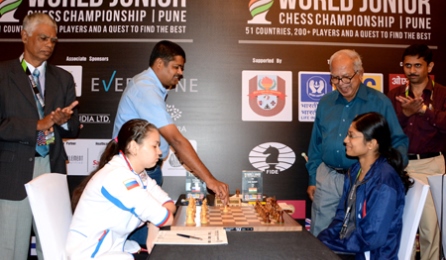 Vijay Kumar presents the round 12 video.