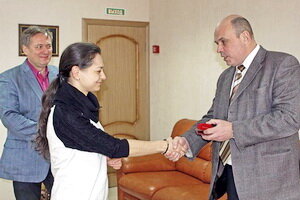 On February 20th, the 12th Women’s World Chess Champion, Alexandra Kosteniuk, visited the Sports Training Center “Izmailovo” in Moscow where she met with Vitaly Troitsky , General Director of the center, and Aleksandr Zlochevsky, senior trainer of Moscow team. At this meeting Kosteniuk was presented with a certificate of Honorable Master of Sports of Russia. Alexandra was awarded this title in July 2012.

“I’m very excited to receive the certificate of Honorable Master of Sports of Russia today. On one hand I have a lot of awards and medals, form the other hand, it is very pleasant to get this kind of recognition for the work I’ve done. Whatever people say, such awards are very important. If there were no such nice signs of attention, the motivation would be different.”