Players fought hard on day two of the Saint Louis Rapid & Blitz tournament, yet very little progress was made. Tough fights and spectacular fireworks on all boards, but we only had three decisive results out of fifteen games. Alireza Firouzja managed to stay in the lead after a big comeback at the end of the day.

The scores were opened with Ian Nepomniachtchi defeating Shakhriyar Mamedyarov. Good opening preparation in Catalan with the modern h2-h4 setup, which soon turned into an irresistible attack on the kingside. After delivering the final blow, Alireza gave a very modest post-game interview. But it was clear that the World Championship Challenger “Nepo” played a very impressive game and was in a great mood to show us more of his entertaining chess.

Jeffery Xiong had some chances to fight for the advantage in the game vs Firouzja and Caruana kept squeezing an academic edge against Dominguez for some time. Both games managed to stay on the rails and eventually finished in a draw.

It seemed Sam Shankland was in trouble against Aronian after a very shaky opening performance, but eventually he managed to come out on top. Sam can certainly be the most disappointed player of the round as at some point, he was just one or two precise moves away from claiming a full point, but Levon Aronian managed to escape. Finally, Hikaru Nakamura was very disappointed after not being able to break Vachier-Lagrave’s defense. Nevertheless, he got just one real, but difficult to find chance to win in the whole game.

Fabiano Caruana managed to strike for the first time and it was against none other than Alireza Firouzja, the tournament leader, with the black pieces. It looked like everything went wrong for the young Frenchman who decided to go for a desperate attack after an opening disaster. He sacrificed a lot of material on the way but Caruana kept control and collected a “gift” — a much needed victory after his bad day one. The outcome of the game was crucial for the standings as Alireza lost his sole lead in the tournament.

In a scenario very similar to the previous round, we again had one quick decisive game, two relatively correct draws (Xiong easily holding Aronian to a draw, and Nakamura successfully doing the same against Mamedyarov), and two more very eventful games. Nepomniachtchi played a Petroff against Leinier Dominguez, yet something fell off this time and he almost let his queen be trapped in the middle of the board on move 16.

Fortunately for Nepomniachtchi, his opponent did not manage to find the winning combination, leading to immediate material losses, and ended up in a defensible endgame instead.

After a couple of missed chances for Sam Shankland, it was time for him to save a very difficult game as well — MVL missed the winning manoeuvre in a rook endgame and let Shankland escape with a draw.

Five players shared the first place before the 6th round after Firouzja stumbled. The question was whether he would be able to regain his lead by winning against Dominguez. Both players were spending a lot of time in the early opening; most of the other games finished while they still had all 32 pieces on the board!

Maxime Vachier-Lagrave demonstrated an inhuman level of opening preparation, sacrificing his queen in his favorite Gruenfeld against Xiong, eventually forcing his opponent to make a draw by perpetual check. The Shankland-Mamedyarov game finished in a draw after massive exchanges and Caruana with Aronian did not manage to get anywhere either, despite a creative opening choice.

Nepomniachtchi prepared another unpleasant Catalan opening surprise (16.Qa1) and his opponent Hikaru Nakamura seemed to be in a lot of trouble after the mysterious queen move. This time Nepomniachtchi did not manage to find the precise way to keep the pressure and was soon glad to be able to force a draw.

And finally, back to the Firouzja game which was just passing into the middlegame stage. Dominguez definitely had the advantage, but the tables turned after the American fell into time trouble and played the passive 18.Nfe1 move. Firouzja quickly advanced his kingside pawns, creating big weaknesses in his opponent’s camp, Leinier lost on time vs Alireza while struggling to make a move in a very difficult position 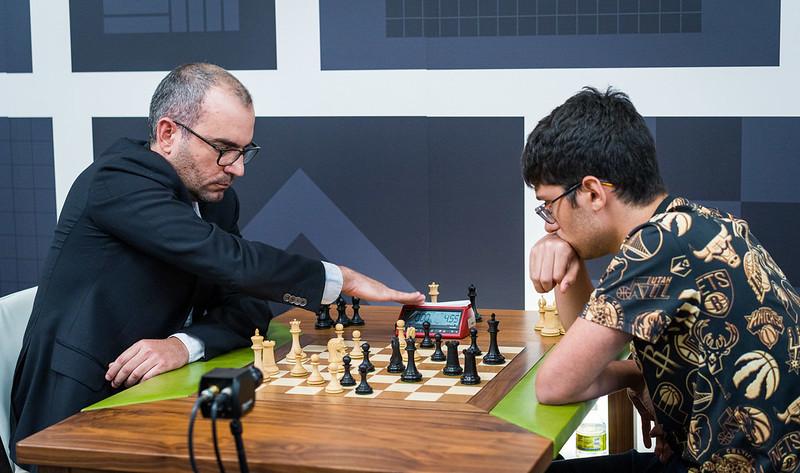 Dominguez did not manage to finish his move in time, photo: GCT/Lennart Ootes

Replay the broadcast from day 2.

Alireza Firouzja has managed to keep his tournament lead and it was anything but an easy task. He was forced to work hard in all three games and it’s still three competitors breathing on his neck: MVL, Xiong & Nepomniachtchi just a point behind him. We’ll see how the final part of the rapid portion develops, with Firouzja playing with white pieces against Ian Nepomniachtchi in round 7.