The first half of the Zurich Chess Challenge concluded today. All the games were drawn after hard fights.

Viswanathan Anand faced his challenger from last year’s World Championship, Boris Gelfand. The Indian opened with e4 and Boris answered with his beloved Najdorf Sicilian. Vishy chose to castle kingside, but anyway pushed his pawns from that flank forward. The game opened-up and a sharp battle took place over the board. Anand got the upper-hand gaining a pawn thanks to his initiative. However, Gelfand showed his defensive skills and simplified to a rook endgame with pawns on the f- and h-files. Draw after 42 moves.

Fabiano Caruana played with white against Vladimir Kramnik. Following his trend of playing strange openings from his repertoire, Kramnik went for the Benoni. It is clear that he does not want to give his opponents from the Candidates the chance to take a look at his home preparation. Even though the Russian is playing openings that are not very usual for him, he is still playing rather quickly, without lagging behind on the clock. When the smoke cleared after the middlegame complications, it seemed that Kramnik had the upper hand with his active pieces, but the Italian held on masterfully and took the game to a drawn position by move 53. 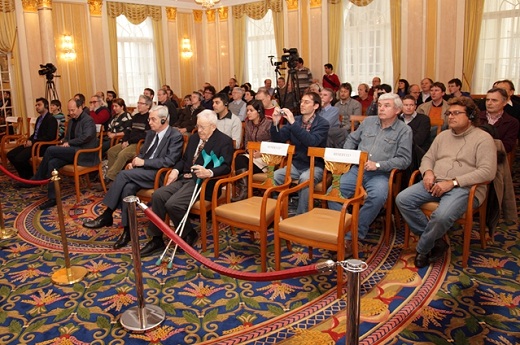 The audience at the playing hall

Tomorrow will be a rest day in Zurich.