Over the 12 years of the Gibraltar chess festival the Gibraltar Masters has run alongside the Amateurs and the Challengers tournaments. These are played from early in the day throughout the 10 day Tradewise Chess Festival and the numbers keep increasing year on year.

This year we have a record number of players in both these tournaments from all over the world who have embraced the festival.

Players return to the familiar grounds of the Caleta Hotel and familiar faces of those who over the years have become old acquaintances. Old friendships are rekindled and new ones ignited. Many players will tell you this is the beauty of this festival and what makes it unique.

After an intense morning they relax through the day and analyse their game, play a friendly and avidly follow the Gibraltar Masters in the afternoon. 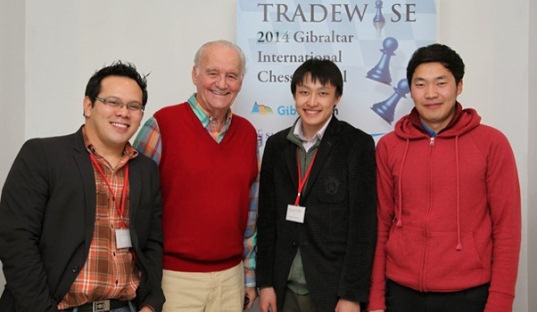 Undoubtedly we are seeing a higher level of chess in these events than ever before. Perhaps most amazing of all is the fact that many Challengers and Amateurs players also participate in the Masters.

This means that after a hard game of perhaps 4 hours, beginning at 09:45, these same players sit down at 3pm and begin a new round, one which can last even longer – perhaps 6 or even 7 hours. The mental stamina required for ten hours of competitive chess in one day is tremendous.

Prizes were presented at the end of the first week in both the Amateur and Challengers tournaments. The first 2014 Gibraltar Festival prizegiving took place on Friday afternoon. Festival Organiser Brian Callaghan, OBE, presented the prizes.

Details of the winners are on the tournament website