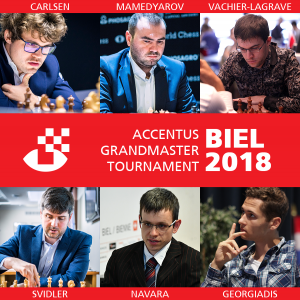 The Accentus GM tournament of this year’s Biel International Chess Festival is a 6-player double round-robin tournament taking place from 22 July to 1 August 2018 in Biel, Switzerland featuring the reigning World Champion Magnus Carlsen, Shakhriyar Mamedyarov, Maxime Vachier-Lagrave, Peter Svidler, David Navara and local hero Nico Georgiadis. Players receive 100 minutes for 40 moves, followed by 50 minutes for 20 moves, then 15 minutes to the end of the game, plus a 30-second increment starting from move one.

The organizers of the 51st Biel International Chess Festival are delighted. After the announcement of the participation of the reigning World Champion Magnus Carlsen last March, the 6 participants of the ACCENTUS Grandmaster Tournament are now all known.

And the Norwegian favourite won’t have it easy! Along with the five-time winner Maxime Vachier-Lagrave (France, No. 6 in the world), Shakhriyar Mamedyarov (Azerbaijan, No. 3 in the world ranking) will be a serious competitor for the tournament victory.

Defending Russian champion Peter Svidler (14th in the world) will also have his say, knowing that he has often caused problems to Magnus Carlsen in the past. The Czech David Navara (24th in the world) and the 22-year-old Swiss Nico Georgiadis (Schindellegi) will complete the field.

The level of the tournament is thus comparable to the 2012 edition, although tournament director Yannick Pelletier adds: “The 51st edition will be much more prestigious due to the presence of the reigning World Champion and two other representatives of the world’s top ten”.

ACCENTUS, main partner of the Grandmaster Tournament, also supports an event for the benefit of young chess players. 75 juniors under the age of 16 will be invited to three simultaneous tournaments on the opening day of July 21. This spectacular event will attract the attention of spectators and the media on the central square in Biel.

The Physicians’ Tournament is being held for the fourth time this year and will take place on Sunday, 29 July.

All information about the tournaments and the participants can be found in three languages on the website of the Festival – www.bielchessfestival.ch