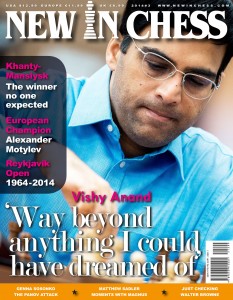 Vishy Anand got a great boost from his first win against Levon Aronian in the Candidates Tournament. ,,A good result gives you wings”, says Anand in New In Chess magazine. ,,One lucky break and you feel very positive about the remaining games, and one result like this tournament and you feel very positive about life. This game was exactly the break I needed on so many levels.” Anand had never before beaten Aronian with the white pieces. ,,It was simply a very good game that gave me creative satisfaction. To beat the winner of Wijk aan Zee like this, you knew somehow that your tournament was going to be reasonable at least.”

After his unexpected victory in Siberia, Vishy Anand was interviewed for New In Chess magazine 2014 ​#​3 that was publis​h​ed today and is available in print and online. He reveals that a dinner in London, during the Chess Classic, was important for his decision to play the Candidates’ in Khanty-Mansiysk. Anand had invited Kramnik for dinner to support him after a loss against Nakamura, but it turned out that Kramnik tried to convince Anand that he should play the Candidates’. ,,Somehow it was obvious to me”, says Anand, ,,that if I were somewhere else watching the others play the Candidates’, I’d feel like killing myself. And in a way, hearing Vladi describe it in that way, “Why on earth would you not play?”, maybe that also helped.”

The former World Champion now will face Magnus Carlsen again. His victory in the Candidates has changed things, says Anand. ,,I think a win like this changes your own perspective. A win like this suddenly gives me a lot of happiness, a lot of enthusiasm, positive emotions. If there was a list of problems to be solved, it would probably be as long as ever, except for one item, because top of the list has to be feeling good about your chess, or improving your morale. Under those terms I feel positive now and I am ready to give it another try and I am excited about it. Grischuk made a very perceptive point. He said, Whoever wins the Candidates’ will benefit from having won the Candidates’, and I think this is exactly right.’’

To read the full length interview with Anand and his annotations of the game with Veseling Topalov, you can order New In Chess magazine here.