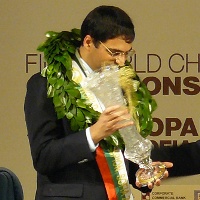 This month I met Anand again, in the town of Bad Soden, near Frankfurt. He really hadn’t changed much; his boyish looks clearly belie his 42 years. He had come from Moscow, where he met with the heads of the Russian chess federation to clarify a few details about his world championship match next year against the contender: Israeli grandmaster Boris Gelfand.

My encounter with the reigning world champion, held at the Chess Tigers training center, was arranged with the generous help of Hans-Walter Schmitt, a businessman and avowed lover of chess, and a close friend of Anand’s. For years, Anand has come to Bad Soden to rest, focus and practice; he has an apartment a short walk from the training center. From here he was to go to Brazil, to participate in the first stage of a large international tournament, which will conclude in Bilbao, Spain. Anand and Gelfand will also cross paths in the middle of November, in Moscow, for a tournament commemorating the late Jewish world champion, Mikhail Tal 2011. Anand will then participate in two more tournaments, before the moment of truth: the World Chess Championship 2012 match against Gelfand, in May 2012. Anand says he is already preparing.

“Professional players work almost every day, for hours on end, and the emphasis is on the word ‘work,'” he says. “It can be with a partner or it can be alone, but professional chess is always a pursuit of something new and surprising.”

The Anand-Gelfand match in Moscow will be an encounter between “pensioners.” Chess may not be athletics, swimming or soccer – but here, too, an international encounter between a champion of 42 and a contender of 43 is unusual. In our computer generation, young chess players reach the heights far earlier, often between 16-17 and 20-22 years of age. A 25-year-old player can be considered mature and experienced, after taking part in dozens of major competitions.

How significant is a player’s age in chess?

Anand: “That is a complex question. Preparedness for a game that usually lasts four-five hours requires good physical condition and also steady nerves. I don’t know how many calories an average chess player burns per game, but it often exceeds that of a player in ball games. It is not only the chess as such: You need to be fit and undergo complicated preparation.”

“As for the age of professional chess players, which is getting younger … it is not a decisive factor,” he explains. “The computer era is bringing many young talents into the game, and some of them are developing into a serious power in world chess. Magnus Carlsen, who is 19, is a full-fledged, top-ranking player, and there a few other mega-talents. But still, the ‘veteran generation’ – Boris Gelfand, me, Vladimir Kramnik, [Vassily] Ivanchuk, [Veselin] Topalov – all those who are scraping the age of 40 or have already passed it, are coping successfully with the challenge, at least for the time being.”

Following Boris Gelfand’s victory in the World Chess Federation’s Candidates Matches held in Kazan, Russia last May, the prevailing opinion among the world’s top players – whether off or on the record – was the same: The reigning champion, Anand, is the clear favorite to win the 12-game match next May and will almost certainly retain the crown he has held since 2007. (In fact, he had been world champion from 2000 to 2002, but at that time world chess was split into two competing federations, and Anand was crowned by only one of them: the World Chess Federation, or FIDE. )

“The favorite?” Anand repeats the question. “There is no point trying to figure out who is better on paper, you simply have to play better at the right time. I have known Boris well for many years, and have a high regard for him. He has been in the top ranks of world chess for almost two decades and has nothing to prove to anyone. In fact, if you examine his win in the World Chess Cup at Khanty-Mansiysk [in Russia] and in the Candidates Match in Kazan, you have to be very impressed, even if your name is Anand and you are the reigning world champion. Gelfand is a chess player who works very hard, and ahead of the match against him, it is necessary to work very hard, too.

“I have known Boris long enough to know his power as a chess player, and I never ruled out the possibility that he would reach the tournament for the title. Boris and I are old friends, and I can tell you clearly that in the Candidates Matches, which he won impressively and justifiedly, he was not the underdog against anyone, even if on the eve of the tournament Vladimir Kramnik and Levon Aronian were considered more ‘threatening’ and more impressive. But it is not at all certain that they are more diversified than Gelfand, a player who lives the game possibly more than anyone in the top world ranks. From this point of view, Vassily Ivanchuk is perhaps his only equal.”

During the conversation, the monitors at the advanced training center in Bad Soden showed positions used in the World Chess Cup tournament, which was then under way in Khanty-Mansiysk. Playing in one of the decisive games was Peter Nielsen, from Denmark, who has worked as an assistant to Anand for many years. Anand excused himself and gazed at the chessboard. Within seconds, he figured out how Nielsen could extract himself from an inferior position. To Anand’s disappointment, however, the telepathic waves did not convey his idea across the thousands of kilometers and Nielsen lost. 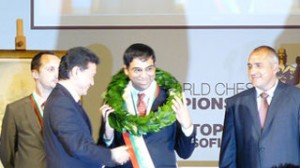 Anand about Moscow as host of the WCC 2012

Our conversation resumes. The next question concerns the decision by FIDE to reject the candidacy of India and of the Tamil Nadu State government to host the match against Gelfand. Is Anand disappointed, I asked, especially because India’s financial offer, $4.5 million, was higher than that of Russia?

“I don’t know if the word ‘disappointed’ is appropriate here. It would have been intriguing to play in India, especially in Chennai, where I was born. In my opinion, India has never once been truly exposed to a chess event on this scale, and it’s a bit of a pity – it would have been exciting to play there. But I have no objections to playing in Moscow, either, in the capital of a chess power like Russia.”

Anand, it turns out, is not acquainted with the Russian billionaire Andrei Filatov, who donated more than $3 million and thus tipped the scales in Moscow’s favor. Formally, FIDE says that the decision to award the match to Moscow stemmed from the higher cash award it offered ($2.55 million, an offer that was “revised” at the last minute, against the Indian offer of $2.25 million ). Knowledgeable sources relate that behind-the-scenes political pressure was exerted to grant Moscow the right to host the upcoming championship match, for the first time since the unforgettable battle between Kasparov and Karpov in 1985. In his recent visit to Moscow, Anand was told that “everything will be all right” on all counts.

Is Moscow preferable from Gelfand’s point of view?

“I imagine that Boris preferred Russia, which is of course legitimate,” the world champion replies. “As far as I am concerned, it is not important where to play, as long as the conditions are comfortable for both contestants.”

Anand has already proved his ability to tackle a tough adversary on the latter’s home court and under adverse opening conditions. Not many in his place would have agreed to hold a match for the world title against the Bulgarian grandmaster Veselin Topalov in Sofia, of all places, in light of the rumors that the contender for the title – together with his manager, Silvio Danailov – resorted to provocative methods in order to rattle his adversary. Anand had arrived for that match, in April 2010, by bus, because of the cloud of volcanic ash which grounded flights in Europe at the time.

More from the fantastic article by Eli Shvidler in Haaretz