Viswanathan Anand and Boris Gelfand start their World Chess Championship 2012 match in a few days. In order to have their mind only on chess after the opening ceremony, they visited the playing hall to make sure everything is in order.

During the World Championship two years ago in Sofia Anand and Topalov inspected mostly the light and the chairs. At the time the two inspections were kept separate. This time Anand and Gelfand visited the Moscow venue together, performed the usual checks, and even sat behind the board(!) to get a taste of what is coming up in the next days. 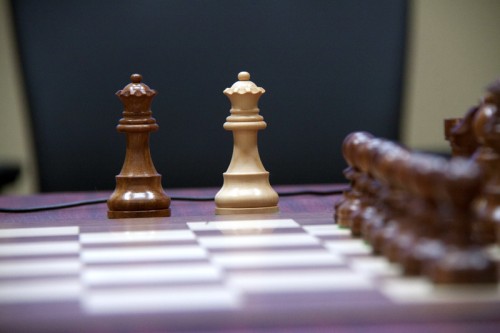 We officially present you the first close up photo of the chess set for the World Chess Championship 2012. Nothing fancy, a standard chess set letting the players concentrate on the moves. 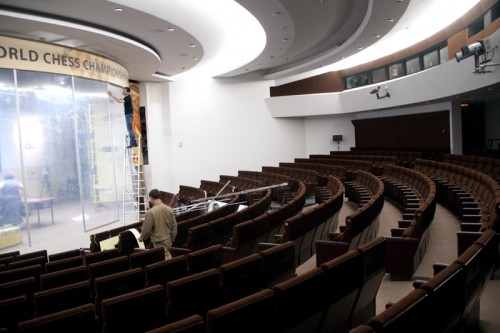 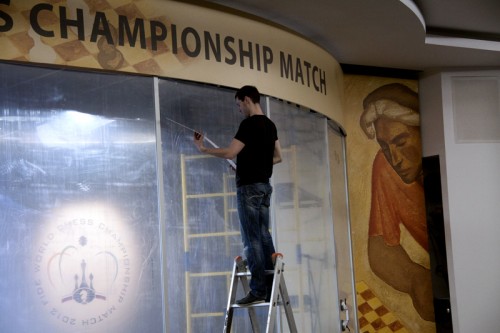 The last details being adjusted, note in the background the fine art that will meet the players and the audience 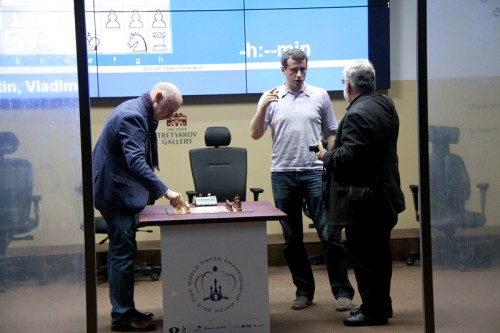 The scene is ready for WCC 2012 action, and Ilya Levitov is making sure everything is in order 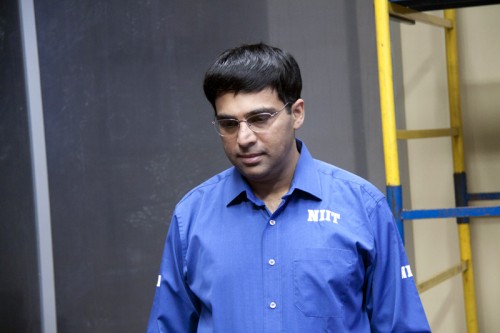 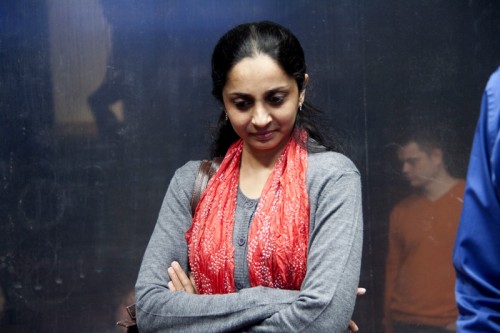 ... with his wife and manager Aruna accompanying him as usual 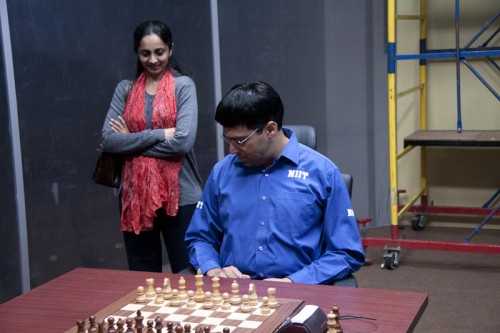 Testing of the chair in action... a little up, a little down.... 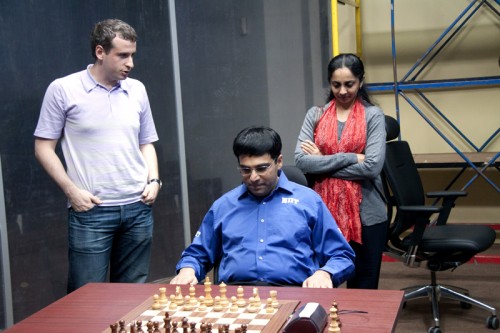 Levitov making sure Anand is comfortable 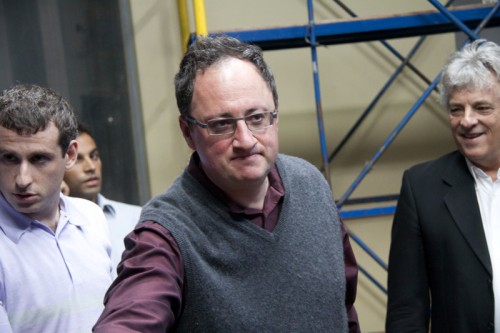 There comes Gelfand as well, greeting the organizers and his opponent's team 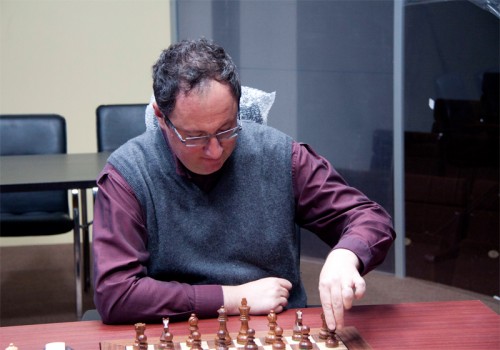 The chair is not that important for Gelfand, what matters is testing the chess set! 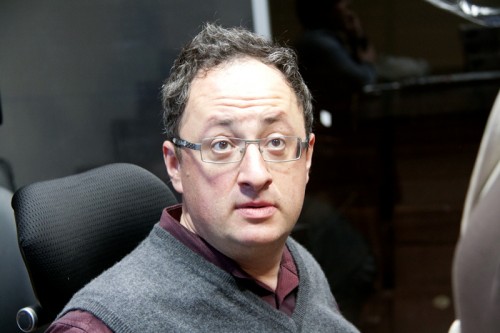 "Are we starting the match now?" an eager for the crown Gelfand asks 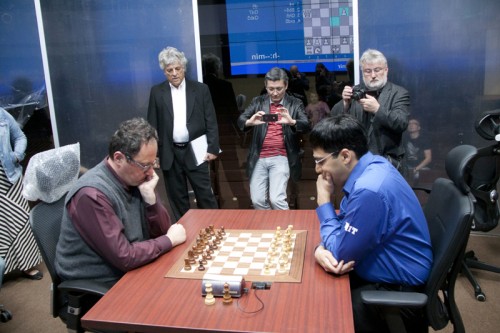 Anand says "Why not?" and the players try out how it would feel in just a few days 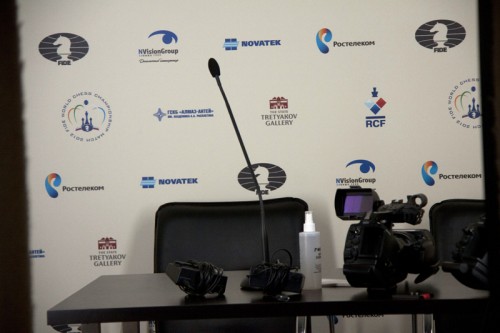 This is the press conference hall, from where we will be hearing daily from Anand and Gelfand their thoughts on the game 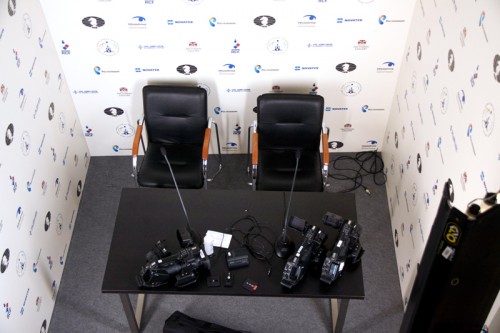 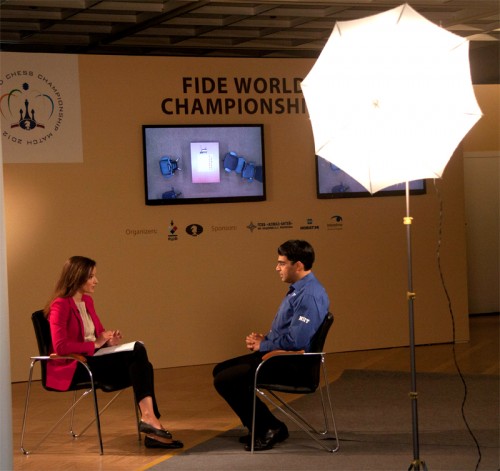 Anand tries out his first interview in Moscow, at the official TV and media place 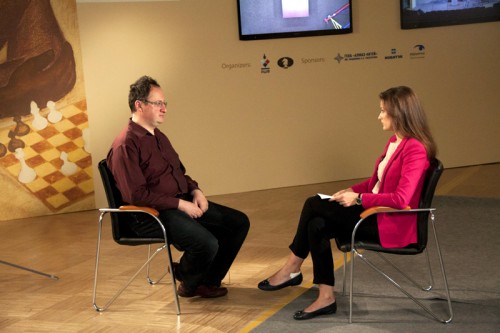 And so does Gelfand, enjoying the last day before the official opening ceremony

All photos by E. Kublashvili