The first game of the FIDE World Chess Championship Match finished in a draw.

Replay the moves with analysis by IM Aman Hambleton and GM Vidit Gujrathi. 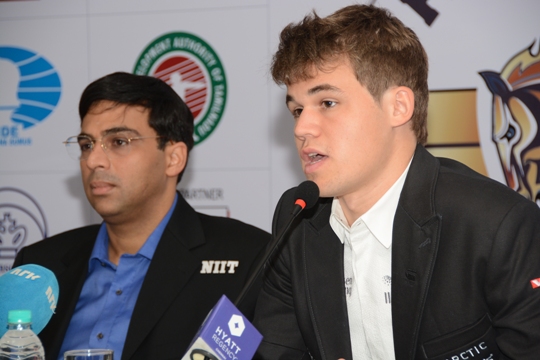 Question: Please tell us about the game in general and how did you feel when the match finally started.

Anand: Yes, I mean, after thinking about it for months and months well today it finally started, almost a relief to get a chance to play.

I was seriously considering playing 13…b5 here, and 14.cb6 Na5 15. Qb2 ab6 and 16.Ne5 I thought was keeping the balance reasonably well, so I decided to repeat, but I mean after b5 there was also 14.a4 which was playable but I thought he would go for cb6.

Carlsen: Well, of course I was happy actually to be able to play today, about the way the game went today, in general in these lines, play develops a little more slowly, but here there was an immediate crisis and I didn’t see that any of my options were particularly promising, particularly as I missed as Vishy mentioned earlier, move 13 Qe1 and 13…Nb4 is very strong – from then on I had to pull emergency brakes, and had to go for draw. 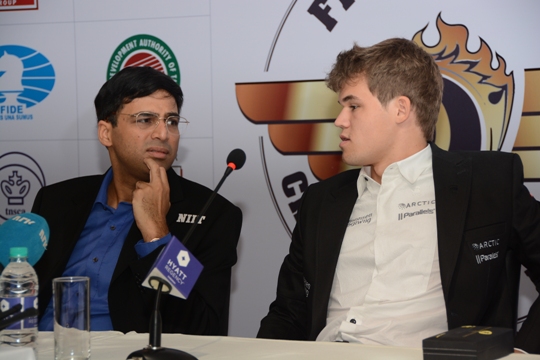 On the questions about the media coverage, the players said:

Anand: Of course, I am very happy it is being covered well, right now I am focused on the game, am sure afterwards it would be nice to reminiscence.

Carlsen: I am happy that all the media, spectators have turned up, hopefully in the next few days we will give more than 1.5 hrs of play.

Question: So, both of you are happy with the first game, or you are disappointed Magnus?

Carlsen: I wouldn’t say I am happy, but the way game the went, there was definitely nothing more for me. I am not unhappy either. It’s a long tournament, and you cannot, as Vishy said, we can’t react to every little thing that happens, this is a fairly normal occurrence that you do something slightly wrong in the opening and you just have to shut it down.

On the question how different is a match compared to a a tournament:

Carlsen: There were some butterflies, but as I said it’s just nice to finally get going with the match, hopefully there will be some more exciting games to follow.

Question: Anand you are at home, how is your difficulty to meet the demands of your fans?

Anand: I am thrilled that it is happening in Chennai, honestly I am in sort of a bubble, I am playing the match, so only afterwards I will find the full impact of the match.

I am trying to create a usual atmosphere I play the match, but I have never played, it’s been ages since I played this close to home.

The last time I played Dreev in 1991, this time it’s even closer, driving wise, I wouldn’t say that I am not thrilled.