Shakhriyar Mamedyarov and Viswanathan Anand stuck to their guns, Vishy defended with the Slav while Shakh once again played knight on d2.

After the introductory moves white expanded in the center with e5 and f4. The former World Champion didn’t lose time and immediately undermined the pawn chain. White’s inability to bring the rooks to the central files, controlled by the beautifully placed black bishops, proved that his position was a little over-extended.

Mamedyarov was forced to make a concession and exchange the light-squared bishops. However, this maneuver left the squares around the white king horribly weak. 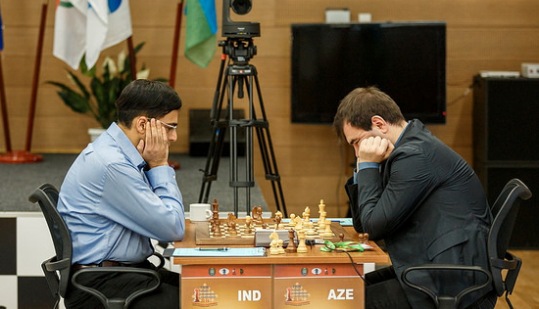 Anand jumped on the opportunity and quickly mobilized the heavy pieces to attack the opponent’s king.

Anand suggested possible improvements in 24.Bc5 or 24.Bf2, instead of the game move. Mamedyarov replied that 24.Bc5 Rd8 is unpleasant. Anand agreed and said that probably 24.Bf2 was the best try.