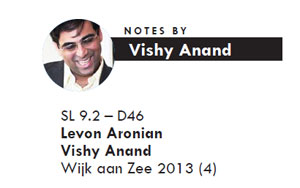 World Champion Vishy Anand is very proud of the game he won against Levon Aronian in Wijk aan Zee. “I saw some very flattering reactions to our game”, says Anand in the latest issue of New In Chess magazine. “Evergreen being one of them, and it would be silly to pretend that I didn’t find this game incredibly beautiful, especially to play. I am quite proud of it.”

The new issue of New In Chess magazine, #2 of 2013, with more than 100 pages of chess delight, is now available. It has exclusive annotations by Anand, Aronian, Carlsen, Caruana, Karjakin, Giri and many others.

It brings you more than a 100 pages of the best of chess with:
• A 40-page special on Wijk aan Zee
• On-the-spot reporting from Gibraltar and Baden Baden
• Sergey Shipov compares five junior aces: Rapport, Dubov, Van Kampen, Grandelius and Ipatov
• Boreslav Ivkov strikes back
• Anish Giri: “25. Rh5 g6 26. Qf5!! Sniff sniff”
• How Harry Pillsbury burned himself out
• Nigel Short: Van Wely should be grateful to US immigration
• Jan Timman: the secrets of Carlsen’s technique

New In Chess has a Special Candidates Offer. Try 3 issues for just 19,95

The 75th Tata Steel Chess ¬tournament ended in a sweeping victory for Magnus Carlsen. With seven-league strides the world’s number one raced through the jubilee edition to finish one-and-a half points ahead of fellow-Candidate Levon Aronian.

How difficult is it to overcome the small distance that separates the A-Group and the B-Group in Wijk aan Zee? Sergey Shipov takes a closer look at the up-and-coming young talents.

John Hilbert and Olimpiu Urcan describe a week in the gruelling exhibition life of the great American champion.

Nikita Vitiugov is victorious in his Gibraltar Masters debut climbing to the top amid tough competition. Zhao Xue, only a point behind, claims the top woman’s prize.

Yochanan Afek has a keen eye for baffling moves. Can you find the mates that grandmasters missed?

Nigel Short explains what both the average player and the pro have to look for when they plan to play an open tournament.

A relieved Vishy Anand won his first classical tournament since 2008. As the early leader Fabiano Caruana collapsed in the turbulent last rounds of the Grenke Chess Classic, the World Champion crowned a return to good form, leapfrogging to clear first place with two dashing wins.

As abruptly as he had dropped out of the Top 10, Fabiano Caruana shot up to seventh place in the world rankings again with probably his finest achievement to date.

Jan Timman analyses two games that show the strength of Magnus Carlsen in all phases of the game.