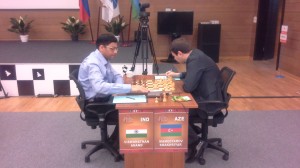 Anand – Mamedyarov in round 3

The Candidates Tournament 2014 has an early sole leader. After only three rounds the ex World Champion Viswwnathan Anand is clear first with 2,5/3. Anand defeated Mamedyarov, and just like in round 1 is the only leader of the day. Anand is 1/2 points ahead of Kramnik and Svidler, who fought the longest game of the day and shook hands for a draw after 4h and 30 mins. A detailed report follows, find the full standings and replays here.

Shakhriyar Mamedyarov and Viswanathan Anand stuck to their guns, Vishy defended with the Slav while Shakh once again played knight on d2.

After the introductory moves white expanded in the center with e5 and f4. The former World Champion did not lose time and immediately undermined the pawn chain. White’s inability to bring the rooks to the central files, controlled by the beautifully placed black bishops, proved that his position was a little over-extended.

Mamedyarov was forced to make a concession and exchange the light-squared bishops. However, this maneuver left the squares around the white king horribly weak.

Anand jumped on the opportunity and quickly mobilized the heavy pieces to attack the opponent’s king.

Anand suggested possible improvements in 24.Bc5 or 24.Bf2, instead of the game move. Mamedyarov replied that 24.Bc5 Rd8 is unpleasant. Anand agreed and said that probably 24.Bf2 was the best try.

Dmitry Andreikin is an unpleasant opponent for Sergey Karjakin, having eliminated him in the 4th round of 2013 World Chess Cup.

Karjakin defended with the Berlin Ruy Lopez, and Andreikin avoided the famous endgame by slowly expanding in the center with d3, c3 and d4.

Black traded on d4 and struck back with d6-d5. After the massive exchanges, black found the excellent move 17…Qd5 to hold the balance.

With the weakened pawn structure around his king, Andreikin couldn’t find anything better than to trade all the rooks and force perpetual check.

Despite the loss in the first round, Levon Aronian didn’t hesitate to repeat the Ruy Lopez Anti-Marshall. Veselin Topalov chose the line that was earlier seen in Grischuk’s games.

Black conceded the bishop’s pair to get a pawn on d4 and the position appeared to be equal. White decided to complicate the matters with the queen’s excursion to h5.

Aronian thought for a long time but eventually decided not to take the pawn on e4. Soon-after he played 22…Ba6 allowing wild complications after 23.Bd6.

White captured the h7-pawn and set his f-pawn in motion. But black was just on time to create counterplay by pushing his d-pawn. White was eventually forced to take the perpetual check.

Peter Svidler didn’t want to test Vladimir Kramnik’s Nimzo-Indian or Ruy Lopez and decided to start with the English Opening.

It was a fairly normal position as black forced the trade of white’s light-squared bishop, but then 15…e6 gave the signal for Svidler to amass his pieces on the d-file.

Kramnik clung onto his pawn, but Svidler managed to break through by getting e5 and c5 in. White got an imposing passer on d6 but it was very difficult to force its advance.

Already around move 30 the players run into zeitnot and for the final moves before the time control they were down to seconds.

When the smoke cleared, it appeared that white will finally remove the blockading rook from d7, but black was very resourceful to find counterplay. The amazing 45…f5 and 46…Rf6 saved the day for Kramnik.