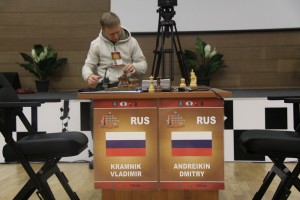 After the first round, Viswanathan Anand took the lead, as he was the only winner of the day.

Dmitry Andreikin and Vladimir Kramnik, the World Cup 2013 finalists, were paired in the first round of the Candidates Tournament.

The players moved quickly through the opening, in the line of Nimzo-Indian defence which Kramnik used before with great success.

The position quickly simplified into an equal rook endgame and the competitors signed a draw on move 32.

Kramnik commented that as he played the first game with black pieces, he just wanted to avoid a defeat and get warmed up for the tournament. He didn’t want to reveal how deep his preparation was, but he noted that he already had the position after 21…Qe4 in the game against fellow Candidate Shakhriyar Mamedyarov. On that occasion Mamedyarov took a draw with perpetual check.

Andreikin decided to play on because he though that after 24.b6 maybe there are small problems for black. He showed some lines in which white could have obtained advantage, but Kramnik was up to the task and comfortably held the position.

Do not miss the full photo gallery of Candidates 2014 here 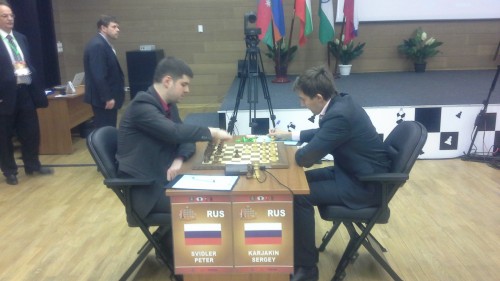 In the other Russian derby, Sergey Karjakin and Peter Svidler fought in the Taimanov Sicilian. White quickly expanded in the center, while black looked for his chances on the queenside.

The black knight remained strained on the edge of the board, but it still performed an important function of defending the f5-square.

Apparently neither of the players saw a possibility to create winning chances and the game ended with moves repetition.

The pairings were known well in advance and all participants had more than enough time to prepare for specific opponents. Svidler said that he checked many lines and he thought there was a big probability that this setup will occur. This morning he spent three hours repeating all the variations, but somehow he forgot to look at 8.f4.

Karjakin said that he also expected this line but he forgot the preparation.

Svidler was pleased that he survived the initial assault but he just couldn’t see how to develop the play. He felt stuck. there was an option to open the game with 23…fxe4 24.bxc4 bxc4 25.Ka1 where black would get some counterplay on the queenside, but his knight would still remain out of play. Karjakin suggested 24…Rxc4 as possible improvement and Svidler admitted that he didn’t really look at this as “opening the b-file felt natural”. 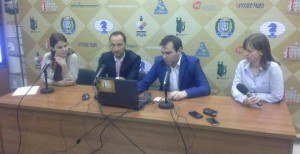 Veselin Topalov defended with Slav against Shakhriyar Mamedyarov who already on the 4th move employed the rare 4.Nbd2.

Topalov proceeded to develop in Gruenfeld-like fashion and quickly struck in the center with c6-c5. The queens went off as early as on move 9, but the game nevertheless remained very interesting.

Black established the knight on a strong outpost on e4 and opened the a-file for the rooks. At the same time white was looking for a chance to invade the 7th rank and attack the opponent’s exposed king.

Mamedyarov admitted that he didn’t get anything from the opening, but after maneuvering the knight to d3 he thought he got some chances. Near the end of the game he thought that he was on the brink of winning, but he just couldn’t finish black off, as there always was some only move that saves the day for Topalov.

In the end the Azeri was forced to drop the ambitions and take a draw with perpetual check. 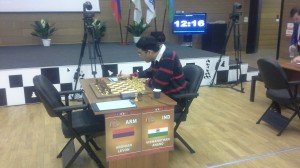 Before the tournament the experts were stating that former World Champion Viswanathan Anand got the most difficult pairing at the start – against the bookmakers’ favourite Levon Aronian.

Anand confidently opened with 1.e4 and soon an Anti-Marshall appeared on the board. After the short delay to insert preparatory moves, Anand snatched the e5-pawn.

Aronian treated the position as “very simple”, as he admitted afterwards, and underestimated the dangers within. After the very strong 19.Ne5 white returned the extra pawn but he kept the bishops’ pair and some positional pressure. At this point Aronian became worried.

Anand believed that he had a small pull thanks to the pair of bishops, but soon he realized that his advantage was much greater. He blasted black’s queenside and relentlessly pursued the black knight until finally closing the net on move 47.