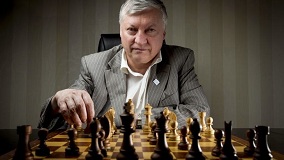 Anatoly learned chess at the age of 4, like Capablanca. At 15 he became the youngest chess master in USSR. In 1969 the 18-year-old Karpov became junior world champion, confirming his status as of the biggest Russian upcoming star.

In 1973 Karpov tied for first in the Leningrad interzonal, then won candidates matches against Polugaevsky, Spassky, and Korchnoi, and advanced to the World Championship match with Robert Fischer, which unfortunately never took place due to Fischer’s excessive demands. On April 3, 1975, Anatoly Karpov became a new World Champion. He quickly solidified his status of the world’s strongest player by winning international tournaments in Milan, Amsterdam, Las Palmas, Tilburg, Bugojno, etc.

In 1978 and 1981 Karpov successfully defended his title against Victor Korchnoi. In 1984 the saga of Karpov-Kasparov matches begun, which lasted for almost a decade – having lost his title in 1985, Karpov resiliently tried to win it back, and was very close to it in Sevilla, 1987, but lost the ultimate game.

Anatoly Karpov does not play often these days, as he is very busy with other occupations. He is a Vice-President of Russian Chess Federation, Duma Deputy, head of a number of charity funds, etc. His hobby is collecting stamps, and his collection’s estimated worth is 13 million Euro.

On behalf of the World Chess Federation uniting 187 member-Federations and me personally, please accept our most cordial congratulations on your 65th anniversary!

Your outstanding achievements have become an important contribution to the improvement of the world chess image and popularization of our favourite sport.

Your brilliant chess career, devotion to chess, modesty, tactfulness and high professionalism make you a role-model to all chess players. As a deputy of the State Duma, you actively participate in the promotion of this wisest game, by opening chess schools and organizing tournaments not only for youth and grown-up players, but in penitentiary institutions.

You enjoy well-deserved respect and gratitude of all who have had a chance to cooperate with you by your indefatigable actions for the sake of world chess, erudition and your principal attitude.

It is my pleasure and honour to wish you, dear Anatoly Evgenievich, the best of health, prosperity, unending optimism, high spirits and further many years of success in our service to our common cause!