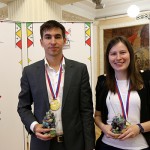 The final eleventh round of the Russian Championship Superfinals was played on September 5th in Satka.

Dmitry Jakovenko and Dmitry Andreikin scored 7 points out of 11. The players determined the strongest in a play-off match. The first game ended in a draw, while the second one was won by Dmitry Andreikin, who has become a two-time champion of Russia.

The champion’s title was determined by Olga Girya and Natalija Pogonina, who have scored 7.5 points out 11 each. Natalija Pogonina won the first game and secured a draw in the second one to win the Russian women’s championship for the second time in her career.

Total prize fund is 9,000,000 roubles. Besides, the winners of both men’s and women’s tournaments will also receive a special prize – bright and stylish city crossover Renault Kaptur.

The tournament was a part of the Chess in Museums program, carried out by the RCF together with Timchenko Foundation since 2012. During the Superfinals, the exhibition of the Soviet and Russian painter, a representative of the “Severe Style” Geliy Korzhev (1925-2012) was opened in Magnezit Palace of Culture. The exposition called Painting’s Way. Geliy Korzhev included sketches and graphics from the archive of the artist’s family. The sketches and graphics had been created by Korzhev during the work on his key paintings on historical, biblical and other series from 1953 till 2012.