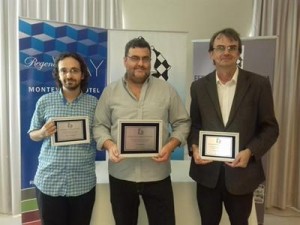 The 2018 Uruguayan Championship was a 10-player round-robin tournament which took place from 7-15 April in Montevideo.

In the last round the two players, who were leading have met. GM Andrès Rodrìguez Vila, who needed only victory as a favorable result, had to make 24 moves to take advantage of the error of MI Bernardo Roselli Malhe, finished undefeated in this tournament and snatch the title.

Andrès collected seven victories to achieve his 7/9 and managed to stay with the title of Uruguayan champion for the second time in his career, after also having achieved it in 2012.

Bernardo, 17 times champion in these tournaments, this time had to settle for second place, thanks to his tiebreaker in favor for having beaten those who finished tied with him with 6/9.

Completing the podium was FM Nicolàs Lòpez Azambuja, who had to battle for 68 moves to get the point against FM Sebastiàn Granara Barreto.

Fourth, also with 6/9 finished the IM Luis Ernesto Rodi, who with black won in 46 moves to Martìn Joel Caitano.

Fifth, with 5,5 / 9 the young CM Gabriel Kimelman finished, who closed a good tournament winning the FM Manuel Larrea in 43 moves in English opening.

Final was played in the facilities of the Hotel Regency Way, where in June the Continental of the Americas will be played. After the 2018 final, the Olympic qualifiers were also defined. These are GM Andrés Rodríguez, MI Bernardo Roselli Mailhe, MF Nicolás López Azambuja, MI Luis Ernesto Rodi, and MF Rafael Muniz.