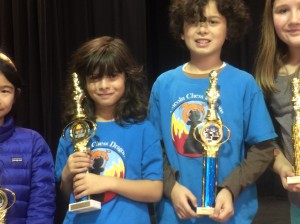 Anjali Walhs, the youngest certified trainer in the world, together with her brother Ciaran Walsh

8-year old Anjali Walsh is one of the many players currently competing in the massive FIDE World Youth & Cadets 2015 in Porto Carras. She is together with 111 girls of her age in the U10 group.

Anjali, however, is not just another chess player. She is passionate about chess and all aspects of the game even at such early age. Last spring, Irish citizens Anjali and her brother Ciaran Walsh traveled from their hometown of Seattle, USA, with their emigrant dad to visit their Irish grandfather and to play in the world-famous Bunratty Chess Festival held in a small village in the west of Ireland. Before that tournament, while 10-year-old Ciaran visited their grandfather’s childhood home near the Cliffs of Moher, 8-year-old Anjali together with other chess trainers including her dad successfully participated in a rigorous 3-day FIDE TRG Trainers’ Seminar taught by FST Kevin O’Connell. This seminar was followed by a tough written exam.

Her dad, Associate Professor of Law & Director Dr. Walter J. Walsh, shares, “This was a challenging, rich, collaborative training program from which we learnt much and made many new friends and colleagues in the international chess training community.” Anjali passed successfully the test and and while awaiting FIDE’s decision she played in the blitz section of the Bunratty chess tournament. There she played with the ultimate winner GM Wesley So, a game to remember for the young girl.

After TRG Council and FIDE Executive Board approval, as newly minted FIDE Developmental Instructors, Anjali was very proud to see her name listed in April 2015 among the many distinguished international chess trainers listed on the TRG FIDE website.

At only 8 years old (dob 10-18-2006), as shown by year of birth on the TRG database, DI Anjali Walsh has already established her own new FIDE record as the world’s youngest licensed FIDE trainer! She is way younger than the next youngest licensed international chess trainer in age – 12 years old girl DI Yunha Noh of Korea, FIDE ID 133201220. As a FIDE Developmental Instructor, Anjali is now certified and licensed to train and spread the love of chess among children, beginners and intermediate players. 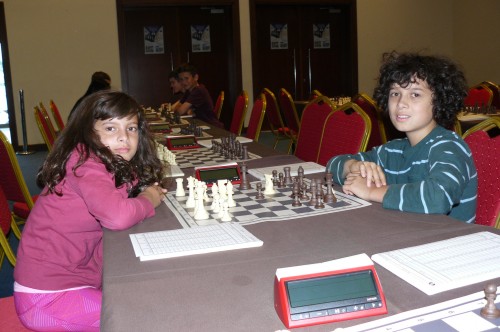 Anjali Walsh and Ciaran Walsh practicing in Porto Carras, the day before the start of the World Youth 2015

More about Anjali Walsh and her family

Developmental Instructor (DI) Anjali Walsh and her elder brother Ciaran live in Seattle, USA, where they are students of IM Georgi Orlov, NM Josh Sinanan, and GM Emil Anka. Until recently, training at the Orlov Chess Academy in Seattle and Redmond was also led by IM Orlov’s spouse, the late WGM and FIDE Instructor Elena Akhmilovskaya Orlov. As a young Irish girl chess player, FIDE DI Anjali Walsh now tries hard to follow in the footsteps of her late Seattle hero WGM & FI Elena Akhmilovskaya Orlov, a great chess trainer and player, who played as the challenger for the women’s world championship.

So through all their hard work, dedication, and their shared love of international chess, these young Irish WYCC players brother Ciaran and his sister Anjali Walsh are now making Seattle rival St. Louis and New York City as the top destinations for playing and studying chess in the United States.