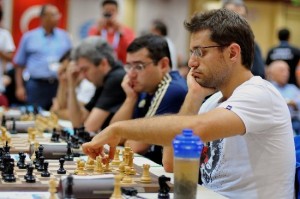 Armenia is the Chess Olympiad 2012 champion! The team of Armenia – Levon Aronian, Sergei Movsesian, Vladimir Akopian, Gabriel Sargissian, and Tigran Petrosian – won the gold medals in Istanbul after collecting 19,0/22,0 Match points. The team of Russia (silver medal) finished with the same match points, but worse tiebreak. Third place is for the team of Ukraine (bronze medal), who won against China in the last round.

This is the third Olympic title of Armenia after winning the gold in 2006 and 2008.

The multiple Olympic champion Armenia started the Chess Olympiad race as expected. Bolivia and Bangladesh fell victims to the powerful machine with 3:1 and 4:0 scores.

The next rounds were more difficult with Spain, the Philippines, and Ukraine as opponents. Exactly there Armenia employed their key team strategy – win one game, draw the others. Aronian beating Vallejo, Sargissian winning against Dimakiling, and again Aronian defeating Ivanchuk were just 3 game points, but were worth 6 match points in the standings.

With things going so well for the Armenian team, they tried to play a secure draw against their main opposition, Russia. Sargissian and Akopian secured their 1/2 point early, but just then Aronian’s position fell apart against Kramnik and Armenia was against the ropes. It was up to Movsesian to save the team, and after a hard struggle on board 2 Armenia got the desired 2:2 score.

The match against Russia clearly exhausted the team of Armenia, and they were up against the powerful China the next round. The hero of the previous day Movsesian was defeated and Armenia lost the match 2,5:1,5.

When everyone was wondering what will happen psychologically with Armenia, they reacted in the best possible way. The team concentrated and achieved victories against Uzbekistan, Germany, and Netherlands in a convincing manner – Naiditsch, Giri, Dzhumaev, Meier, and Kvon all tasted Armenia’s power on the board.

The last round was also successful for the 2006 and 2008 Olympic champions. They defeated the team of Hungary, with Movsesian taking the full point on board 2, and won their third Olympic gold medal.