“White Castle” is the oldest children’s tournament founded in 1969. In the USSR the competitions were staged in every Soviet republic. Annually up to half a million schoolchildren became participants of those tournaments. “White Castle” was a school of the higher sporting mastery for many a talented chessplayer. 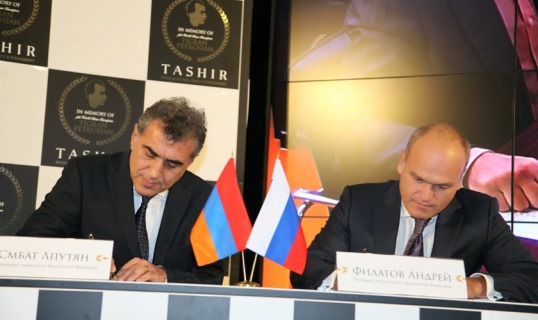 After disintegration of the USSR “White Castle” was discontinued for about 7 years. The revival of the competitions began in 2004. In 2014 73 teams from various Russian regions took part in the “White Castle” final tournament. Principal goals of these competitions are popularization of chess among schoolchildren, detection of talented young players and increasing their sporting skills.

The agreement that has been signed today calls for standardization of school tournament systems in Armenia and Russia. It is stressed in the document that both parties consider it very important to develop school competitions which do not only make chess more popular but also promote friendly relations among schoolchildren of the world.

In accordance with the document the national Armenian federation and the Russian Chess Federation will support staging competitions among educational institutions of their countries in conformity with the “White Castle” tournament policy.

The Russian Chess Federation takes it upon itself to secure places for the winners of national team championships in the “White Castle” finals. Thus, new participants will be included into the school championships system, and the final tournament gets an international status. RCF commits itself not only to holding the final intramural stage of the competitions but also to providing assistance for the national federations in staging their respective championships. 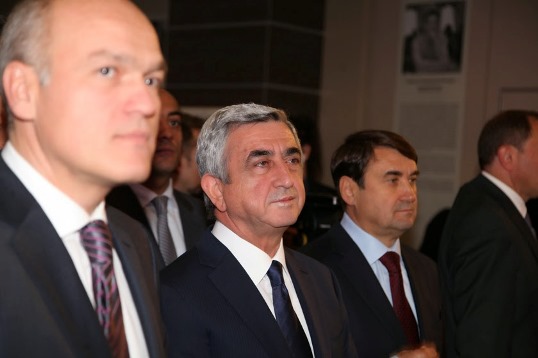 The President of Armenia Serzh Sargsyan emphasized the brilliant organization of the International TASHIR Tournament in Memory of Tigran Petrosian:
– “Progress of chess is obvious not only from the point of view of game itself, but also with regard to the organization of tournaments. RCF and TASHIR group of companies did everything in their power to give the grandmasters the opportunity to approve themselves to the full extent. Without Tigran Petrosian’s great heritage, his talent and achievements, chess in Armenia would never rise to its present level.”

Serzh Sargsyan also expressed gratitude to the Russian Chess Federation for its offer of cooperation.

The President of the Russian Chess Federation Andrey Filatov:
– “One of the key fields of concern for the Russian Chess Federation is development of the children chess. So it is a great honor for us to cooperate with Armenia, a country with a rich history and traditions, where chess has been honored and respected from the earliest times. The Armenian Chess Federation actively develops children chess; the game is a compulsory subject in every school of the country for the children from 2nd to 4th grades. Men’s national team of Armenia headed by Levon Aronian won three World Chess Olympiads out of the last five. We are very happy that young Armenian chessplayers will now take part in the “White Castle” competitions and hope that other countries would join our program in future.”

Zara Ajemian, head of the press relations service of the TASHIR group of companies:
– “These days chess is not simply a kind of intellectual competition; it holds a creative power capable of uniting people and whole countries. Every tournament is a new spectacular story of victories and achievements, and today we are happy to get an opportunity of staging one of the strongest tournaments of 2014 in Russia and in the whole world.”

It should be recalled here that during the World Chess Olympiad in Tromsø similar agreements with the heads of chess federations of Turkmenistan, Belarus, Moldova, Uzbekistan, Kyrgyzstan and Israel have been signed.

The Russian Chess Federation (RCF) is a public non-profit organisation that incorporates individuals and chess federations of republics, regions, oblasts, federal cities and autonomous regions and districts of the Russian Federation. The activities of the Russian Chess Federation are directed towards developing and promoting chess in the Russian Federation. The RCF was founded on February 15, 1992. Its governing bodies are the RCF Congress and its Supervisory Board. The RCF Board of Trustees is a collegial, consultative and advisory body that acts on a voluntary basis.

The Russian Chess Federation organizes the annual All-Russian children championships, the “White Castle” Children’s Chess Tournament for Schools, the Russian Chess Championship and numerous other chess competitions. On the initiative of the RCF the “Chess in Museums” program has been running successfully in Russia since 2012.

73 teams and more that 300 children from various regions of Russia, from Kaliningrad to Kamchatka, took part in the 2014 anniversary championship in Dagomys. About 5000 young sportsmen and sportswomen participated in qualifiers held in 73 subjects of the Russian Federation.

The goals of the tournament are: promoting healthy lifestyle among the younger generation; promoting mass sports among children and young adults; stimulating the pedagogical activities of administrators and teachers of comprehensive secondary schools which are directed at the improvement of extracurricular work’s quality; establishing an integrated system of chess competitions for the teams of educational institutions.