The second round of the Candidates Tournament was played today. Levon Aronian and Teimour Radjabov emerged as the first leaders of the tournament by winning their respective games with the white pieces. The most anticipated game of the day between Magnus Carlsen and Vladimir Kramnik finished in a 30-moves draw.

Aronian accepted to play with an isolated pawn in the center, but mobilized his pieces correctly, putting pressure against Gelfand’s position. On move 25 the Israeli made a mistake with Rc8; this move looked like a good way to equalize, but instead fell under an effective tactical shot by the Armenian.

The resulting ending was clearly in White’s favor and resignation came on move 35. 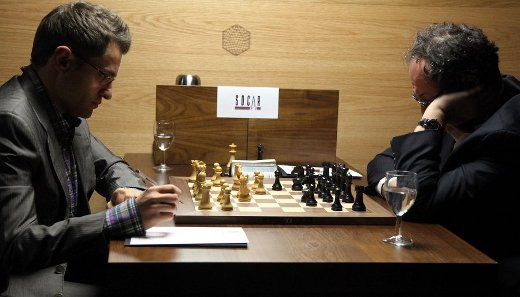 In the post-game interview with IM Lawrence Trent, Aronian said:
“The opening line was considered to be drawish. White has only microscopic advantage, normally I seek for more, but in this tournament I want to be solid.
I had a feeling that black’s 17…Rfd8 was premature, after 18. Nc4 black is somehow tied up. I didn’t like 24…Bd8, I expected 24…Rc8 then 25. Ra1 a6 and maybe 26. Ra4.” 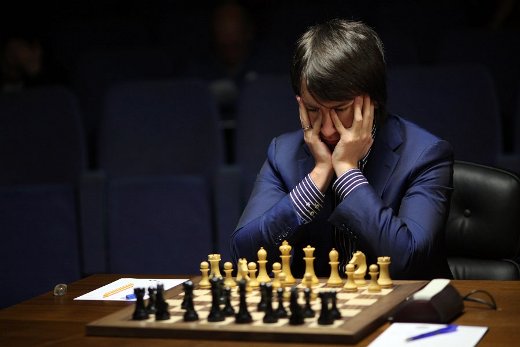 Teimour Radjabov qualified to the Candidates Tournament as the wild card of the organizers, however, the Azerbaijani proved today that it is not a coincidence that he is the Nr. 4 in the world by defeating Ukrainian genius Vassily Ivanchukwith the white pieces.

Radjabov opened with his usual 1.d4 and Ivanchuk chose a Dutch setup in response. This is no surprise given that it is a well known fact that Vassily can play any opening. Radjabov mentioned in the press conference: ”Ivanchuk can play any opening line. I prepared normally but couldn’t go into depth”.

The game then turned very sharp and the players needed to play precisely to maintain equality. When the Azerbaijani managed to put his knight on g5, black’s position became very critical. Ivanchuk decided to sacrifice his queen to try to solve his difficult position. By this moment, the computer already gave a decisive advantage for white, and Radjabov converted it like a true master. Black resigned on move 34.

In the post-game interview, the Azerbaijani also mentioned a curious idea he had during the match:

“I even thought like an amateur player, after 4…Nf6 to play Nd5, trade the Knight and push h4-h5. But this would be too much for the Candidates and I quickly lost that idea.” 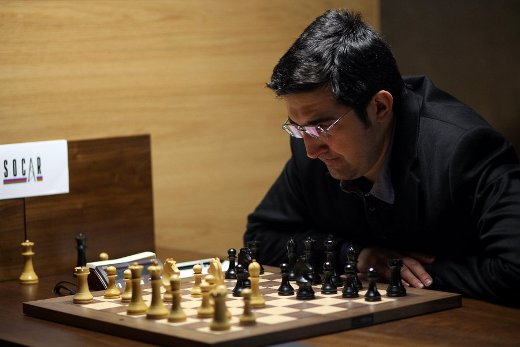 The Russian played his second game in a row with the black pieces and against a very difficult opponent. That is why he expressed his satisfaction in the post-game interview: “A satisfying draw particularly because I didn’t spend much energy”.

Carlsen used his usual quiet play looking for a tiny advantage, but did not manage to find any against Kramnik’s great home preparation.

The Norwegian might have taken into account that the ex-World Champion is one of the opponents that have posed him more problems lately, so decided to simplify the position to a dead draw by move 30. 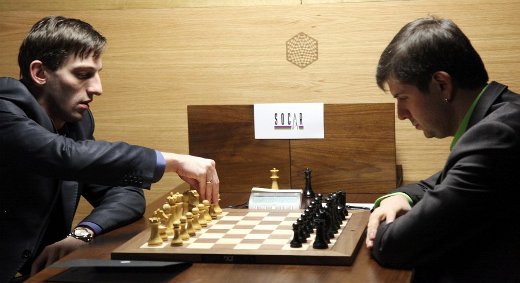 Peter Svidler was Alexander Grischuk’s second during the last Kazan Candidates tournament, but this time had to face him in a direct match.

The players examined the well-known lines of the Ruy Lopez in a battle of home preparations. In the middlegame, Svidler put his queen on the opponent’s camp; Grischuk saw this as a chance to harass his compatriot’s lady, which had to escape to f4 where it was exchanged leaving black with doubled pawns.

This didn’t prove to be a decisive factor and the players simplified to an opposite-colored bishops endgame, and signed the peace treaty on move 41.