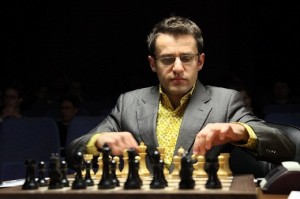 Levon Aronian took advantage of Ivanchuk’s time trouble crisis in the tournament to win his fourth game in London. Magnus Carlsen has a slightly favorable position against Gelfand, and will try to keep pushing in order to maintain the sole lead.

Vassily Ivanchuk continued his trend of playing dubious openings in this huge tournament; on this occasion, he chose the Budapest Gambit against Levon Aronian. The Armenian, probably highly surprised, played safely and maintained the positional advantage that white keeps in these positions. Ivanchuk quickly started to spend a massive amount of time to take rather logical decisions. Eventually, he had just over 1 minute to make 12 moves. Naturally, this led to a huge blunder on move 29. With this victory, Aronian maintains very realistic hopes of winning the event.

Boris Gelfand chose the fashionable Rossolimo variation of the Sicilian Defense to face Carlsen’s 1.e4. True to his style, the Norwegian made some simplifications in order to create a positional battle. Carlsen won a pawn during the complications, but remained with a passive bishop on f1. The position before the time control seems dynamically balanced, but the best rated player in the world has a long-term chance to put pressure on his opponent.