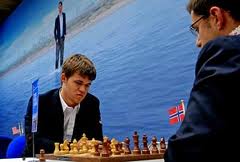 Tata Steel 2013 continues with round 2, where the chess fans are going to witness the first and second seeded face each other in the 2800 ELO club battle. Levon Aronian and Magnus Carlsen are going to protagonize the top rated game of the round in Wijk Aan Zee, in a game that will be commented here live by GM Christian Bauer.

The Aronian – Carlsen matches have long history. Magnus Carlsen has 7 to 4 advantage in the classical games with draw being the most common result, appeared a total of 20 times.

One of the decisive games between the two players was at last year’s edition of Tata Steel, when Carlsen defeated Aronian in round 3. However, Aronian went on to win the Tata Steel 2012 tournament, leaving Carlsen behind.

Today is another chapter of the Tata Steel story, join us live at 13:30 CET with GM Christian Bauer.