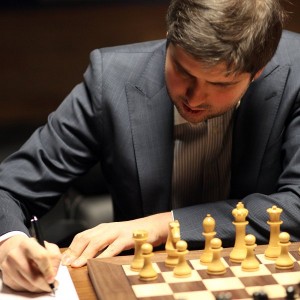 Peter Svidler defeated Levon Aronian at the 11th round of the Candidates Tournament. The Armenian dropped to third place as Kramink won his game against Radjabov. This game might hamper greatly Aronian’s ambitions to get first place.

The players chose the Saemisch Variation of the Nimzo-Indian. Svidler used his usual dynamic style to gain the initiative in the queenside. Aronian tried to answer with a desperate attack on the kingside, but it just worsened his position in the long-term. When the pieces were exchanged, the Russian stayed with two dangerous passed pawns that eventually decided the game on move 41.

Aronian still has two white games in the last three rounds, including one against his direct rival Vladimir Kramnik and one against Teimour Radjabov, who has been showing poor form in this event. He will probably also need Magnus Carlsen to fall at least once, which seems unlikely given the Norwegian’s steady good form in the last year.