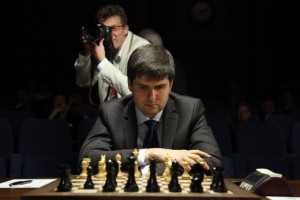 After Monday’s rest day, the players are back at the fighting arena in the Candidates Tournament 2013. Armenian Levon Aronian arrived as the sole leader with a +2 score. Peter Svidler and Magnus Carlsen shared the second place after three rounds. The veterans Gelfand and Ivanchuk are looking for a comeback in their direct encounter – both started with two losses and a draw.

The most expected game was the battle between Aronian with the white pieces and Svidler with black. This is a game where it was relatively easy to guess the opening choices of both players. The Armenian plays 1.d4 almost exclusively and Svidler has been using the Gruenfeld extensively since the beginning of his career. However, the Russian surprised everybody with the Queen’s Gambit Accepted.

Aronian seemed to be well prepared and played his moves almost as fast as the player from St. Petersburg. White eventually won a pawn on the a-file, but his opponent had enough resources to attack it and go for simplifications. As IM Aman Hambleton mentioned during his live commentary, after Svidler recovered the pawn, the players blitzed their moves until finally agreeing a draw on move 31.