Armenian star Levon Aronian got his second win in a row today and is now the sole leader in London. Peter Svidler and Magnus Carlsen trail a half point behind after winning their third round games.

Levon Aronian arrived to the third round as the co-leader, after defeating Boris Gelfand yesterday. He had to play with the black pieces against Vassily Ivanchuk.

These two elite players faced each other in numerous occasions in the past, with Aronian having a small historical advantage. However, today’s game was probably one of the most important clashes for each of them. 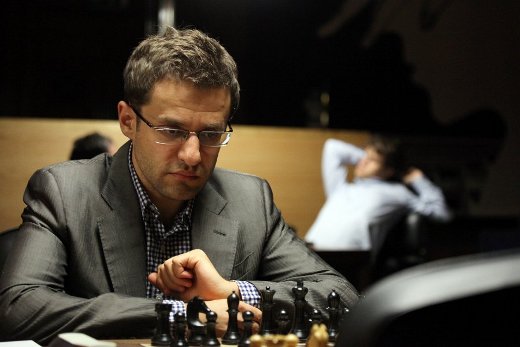 The Ukrainian used the Trompowsky Attack trying to avoid huge masses of preparation in the Queen’s Gambit or the Slav. Aronian followed suit using some of his typical very original play. Ivanchuk pushed his pawns forward looking for an attack and the position became very complicated.

The Armenian then started to show his strength in this kind of positions, playing precise and annoying moves. As usual, Vassily fell in huge time trouble – he had just 8 minutes left for 19 moves. This proved to be the decisive factor as the Ukrainian lost on time on the 35th move after making a mistake with Kd1.

World Cup winner Peter Svidler obtained his first win today against yesterday’s co-leader Teimour Radjabov. The King’s Indian setup used by the Azerbaijani did not surprise anybody. His play, however, was quite remarkable, as he constantly looked for ways to complicate the position.

Eventually, the material balance was slightly altered – Radjabov had a rook for Svidler’s bishop and knight. The contenders had the same amount of pawns, but the Russian’s passed a-pawn was the decisive difference. Teimour was forced to put pressure against this pawn, leaving the rest of the board somewhat unprotected. Svidler took his king to the queenside, activated the pieces and converted the positional advantage into a full point on move 55. 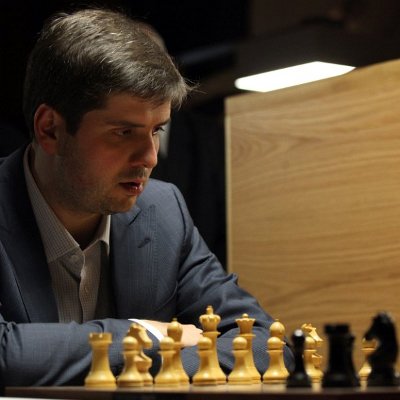 World’s number 1 Magnus Carlsen did not lag behind and beat World Championship’s challenger Boris Gelfand with the black pieces. This is Gelfand’s second loss in a row and he is now in the shared last place of the standings along Vassily Ivanchuk.

The Israeli’s position seemed to be perfectly fine in the middlegame, as he even had more active pieces. However, it is impossible to rule out the chances of the Norwegian prodigy.

Magnus remained calm looking for an endgame where the only advantage he had in the position – the queenside pawns majority – would play a decisive role. His precise play in these positions emerged once again and Gelfand was forced to resignation on the 57th move. 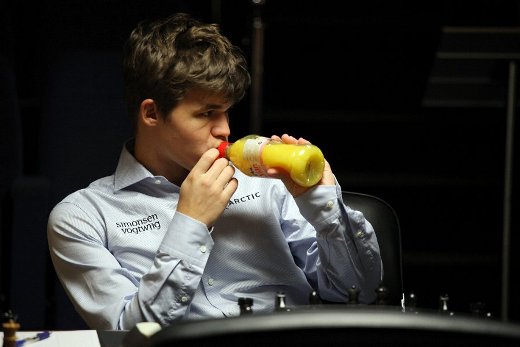 The only draw of the day was seen in the game between the two players that have showed the most solid chess in the event, the Russians Vladimir Kramnik and Alexander Grischuk. The ex-World Champion faced Grischuk’s Gruenfeld Indian defence with fianchetto variation.

Kramnik, true to his style, took a pawn giving up the pair of bishops with the hope of converting his advantage in the long run.

Grischuk, on the other hand, responded with some active play and penetrated his compatriot’s position with the queen. This was enough to reach a triple repetition and sign a draw in 35 moves. 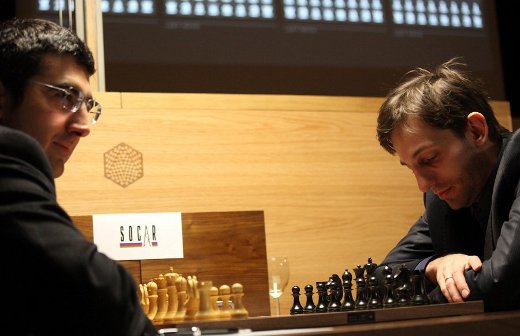 Tomorrow will be a rest day in London. The games will resume on Tuesday, March 19th: Carlsen – Grischuk, Radjabov – Kramnik, Aronian – Svidler and Gelfand – Ivanchuk.