The ASEAN+ Age-Group Championships has completed three rounds of play and already that have been numerous surprises.

In the highly competitive Open U-20 section where both the IM title and a GM norm is the winners reward, it is Yoseph Theolifuc Taher from Indonesia who has the early lead with 3/3 ahead of IM Garcia Jan Emmanuel from the Philippines, Dhulipalla Bala Chandra Prasad from India, and FM Bui Trong Hao from Vietnam.

Top seeded FM Le Tuan Minh has earlier in round two lost to Dhulipalla while second seeded Liu Xiangyi from Singapore who is coming off winning the Asian Schools U-17 Open was beaten by Toseph. 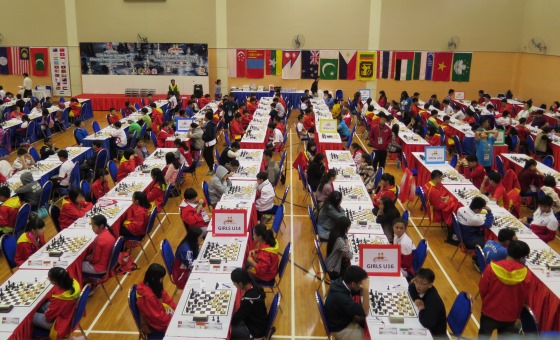 It is WIM Galas Bernadette from the Philippines who leads Girls U-20 and is closely followed a half point behind by her top seeded country girl WIM Frayna Janelle Mae and double World and Asian Schools Girls U-15 Champion Tejaswini Sagar of India after they drew their game with each other.

Also on 2.5/3 are two other Filipinas, WFM Mejia Cherry Ann and WFM San Diego Marie Antoinette and it appear that even at this stage a golden generation of Philippine girls will be dominating this section.

FM Lu Chan Hung from Vietnam leads in Open U-18 and a full point clear after beating top seeded IM Tran Tuan Minh who is also from Vietnam and in Girls U-18, it is the third seeded WFM Chitlange Shakshi from India who is the leader.

Of the other leaders, in Open U-16, second seeded Tran Minh Thang from Vietnam has 3/3 and in Girls U-16 the top seed Legowo Parahita Millyenas from Indonesia has 3/3 while in Open U-14 it is another top seed in Lee Quing Aun from Singapore who has 3/3 as has both WFM Doroy Allaney Jia G from the Philippines and WFM Tran Thi Hing Phan from Vietnam.