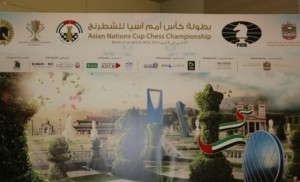 Chess superpowers China and India easily won in the opening round to share the early lead with other favorites in the Asian Nations Cup Chess Team Championship organized by the UAE Chess Federation and Asian Chess Federation at the Novotel Abu Dhabi Bustan Hotel.

The men’s championship is conducted as a 9-round Swiss System among 22 teams. China is the defending champion having scored double victories in both men’s and women’s divisions in the previous two editions in China in 2012 and in Iran in 2014. There are five players in a team and competition is over four boards. Scoring is by match points with tie break using game points. The event boasts 28 Grandmasters, 10 International Masters, 19 FIDE Masters and 3 Women FMs.

The women’s tournament is conducted as a round robin among ten teams. The Chinese women top seed with average rating of 2521, beat Kazakhstan, fourth seed at 2339, by 3:1 as the first two boards were drawn. India, second seed at 2427, shut out host UAE-1 by 4:0. Uzbekistan dealt UAE-2 the same fate. Iran, fifth seed at 2217, edged third seed Mongolia 2.5-1.5 on wins by IM Sarasadat Khademalsharieh and WGM Mitra Hejazipouor. Vietnam, sixth seed at 2287, beat Sri Lanka 3.5-0.5 as WIM S.D. Ranasinghe held IM Le Thao Nguyen to a draw to prevent a shut out.

The tournament is organized by the UAE Chess Federation under the auspices of the UAE Ministry of Presidential Affairs, Abu Dhabi Sports Council and Asian Chess Federation. A World Chess Federation (FIDE) Seminar for International Organizers shall be conducted concurrently by IO Horst Metzing of Germany from 29 March to 4 April at the Novotel Hotel. For inquiries please call Zuhair Hassan Ahmed of Abu Dhabi Chess Club at +971-50-6113117.