After their tense draw in round four, the top two seeds on 3.5/4 in the Open Championship will see it very much as a race to the end but they are at the same time also clearly mindful of being upset with several strong and experienced grandmasters still very much in with a chance to steal one of the two qualifying places.

In round five Wesley So and Nguyen Ngoc Truong Son faced off two of their most ambitious challengers, Gundavaa Bayarsaikhan and Darwin Laylo respectively and while So took the full point, Laylo drew Nguyen after throwing away a winning position! As a result So is now the sole leader with 4.5/5 with Nguyen second on 4/5. 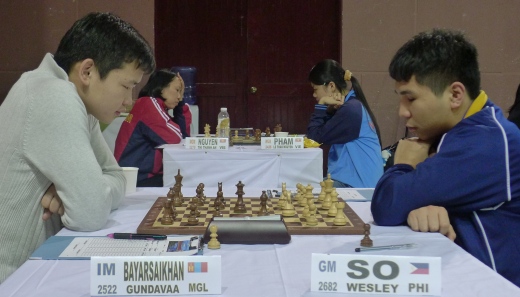 Two equally confident three pointers, Susanto Megaranto and Nguyen Duc Hoa met and played out a hard fought draw while Haridas Pasqua was up against top floater Rogelio Antonio who had started as the third seed but has been bogged down with draws until now when he pushed back the years with a controlled attacking display to crush his much young countryman!

Also on 2.5/4 in fights with each other to advance were Gombosuren Munkhgal who won against Dao Thien Hai and Mark Paragua bested countryman Eugene Torre, while Nguyen Van Huy drew Richard Bitoon, and Cao Sang also with his young colleague Tran Tuan Minh, and so going into round six, sharing third to eighth places are Darwin Laylo, Rogelio Antonio, Susanto Megaranto, Mark Paragua, Gombosuren Munkhal and Nguyen Duc Hoa on 3.5/5. 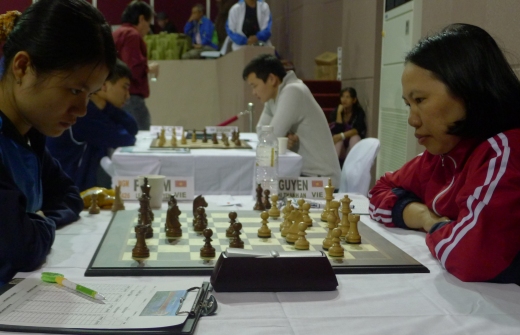 In the Woman Championship it is clear that while the Vietnamese women are all good friends off the board, while in competition it was very much the case of every girl for themselves. Nguyen Thi Thanh An was the leader on 3/5/4 after earlier facing off the Mongolian challenge by beating Tuvshintugs Batchimeg and then drawing top seeded Batkuyag Mungultuul, and in round five she played the remaining big favourite and Vietnam No.1 Pham Le Thao Nguyen on 3/4.

In a hard fought game, Nguyen beat Pham to increase her lead by one point and reach 4.5/5.

Mungultuul was up against Indonesia’s talented and best hope Medina Warda Aulia who had recovered from an early setback against Pham to also reach 3/4 and despite her best efforts the game ended in a draw, and together sharing second to fourth places half a point behind with Pham on 3.5/5. 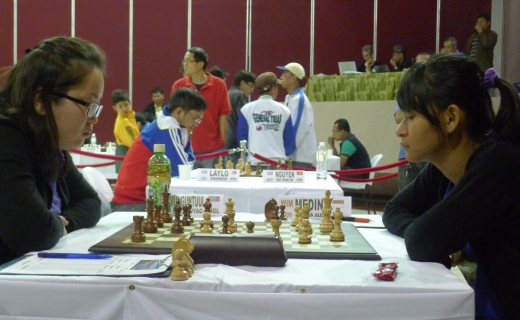 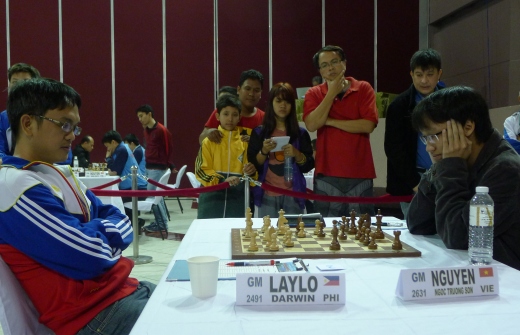